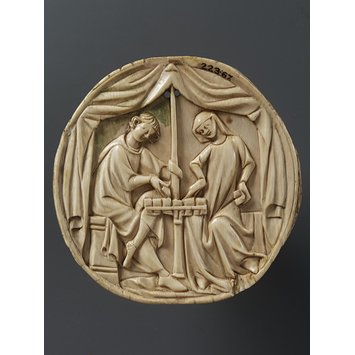 A Game of Chess

This is a mirrorback made in about 1320-30 in Paris, France. It represents a lady and a gentleman playing chess.

The game of chess represented both love and war in the Middle Ages and the contest is mentioned in many of the romances of the period, including the story of Tristan and Iseult. It appears on caskets, combs, plaques and mirror covers throughout the fourteenth century in both France and Germany.

The major period of production of ivories lasted only a little beyond the middle of the fourteenth century. . .The waning of the French ivory industry was largely due to the disastrous financial effects of the Hundred Years War between England and France (1337-1453), yet there was no immediate end of the use of ivory as a material. The centre of the trade moved north to the new commercial centres of Flanders and the Netherlands, and there the major production was only of religious subjects (Randall 1994). With the exception of bone chess boxes and ivory combs with garden scenes and hunts, secular subject matter virtually disappeared from the scene.

Ivory mirror case carved in low relief with a lady and gentleman playing chess. A young man and a lady with a veil and wimple are shown playing chess at a table (which appears to be set on the central pole rather than a separate pedestal) in a tent. The man is cross-legged and he holds the pole with his left hand, as is customary. With his right hand he takes a piece, while his opponent seems about to make her move and holds two captured pieces in her left hand. 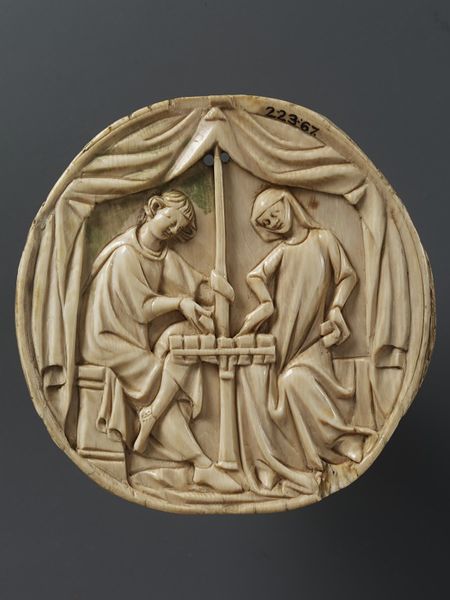