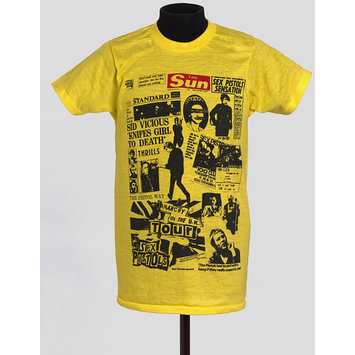 Anarchy in the UK

Designed by Jamie Reid in his then trademark style, the newsprint adorning this t-shirt reflects two sides of the Sex Pistols story. On one hand, in continuing with the 'ransom note'-style designs which had now become part of the defining imagery of the Sex Pistols and the Punk era, the t-shirt seems to warrant the message that despite everything that had happened to them by 1978, the Sex Pistols as a brand would carry on regardless.

The newsprint itself, however, tells the real story, revealing the extent to which the Sex Pistols torrid existence had degenerated. The headlines display the accusations against Sid Vicious, the bass player of the band, of murdering his girlfriend, Nancy Spungen. The photographs of Ronnie Biggs, who had famously escaped from Wandsworth prison after being convicted for involvement with the £2.6 million 'Great Train Robbery' of 1963, chronicles the band's meeting with him in Brazil. He performed on two tracks with the band recorded following their last live performance; these were included on the soundtrack of the film The Great Rock 'n' Roll Swindle. By this point, Johnny Rotten, lead singer of the Sex Pistols, had left the band, due to disagreements with their manager, Malcolm McLaren, and disgust with Vicious. The rest of the band would carry-on, briefly, recording several songs with different singers.

This is where the story that the t-shirt tells ends; Vicious's death from a heroin overdose in February 1979 resulted in the termination of the group in its 1970s incarnation.

Yellow t-shirt with collage in black print of newspaper articles, including headlines about Sid Vicious's murder charge, Johnny Rotten leaving the band, flyers for gigs at the 100 Club, pictures of the Sex Pistols and Ronnie Biggs, the 'God Save the Queen' defacement, the 'Anarchy in the U.K. Tour' Union Jack flag, and quotations from newspapers. Printed in red is a nameplate for 'The Sun' newspaper.

The Mirror / PUNK ROCK ROTTEN RAZORED
From top-left to right

Don't look over your / shoulder, but the Sex / Pistols are coming

GOD Save THE QUEEN / Sex PISTOLS

'The Pistols had to end with a / bang if they really meant it, man'

The sensation surrounding the Sex Pistols peaked in 1978-9 following the arrest and subsequent death of Sid Vicious. The band treated its demise in the same wry, tongue-in-cheek style as its rise to fame. The T-shirt reads, 'The Pistols had to end with a bang if they really meant it, man'. [52 words] 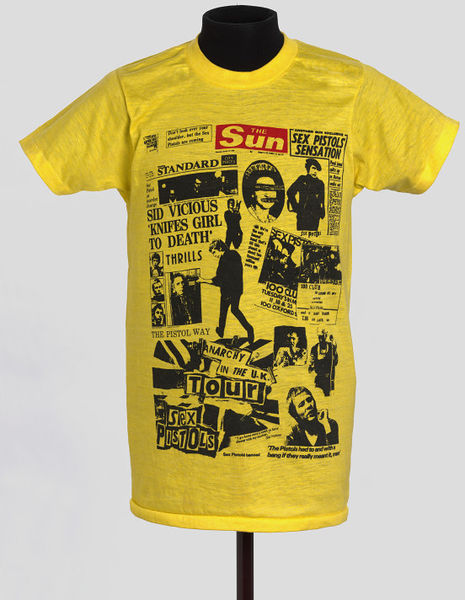