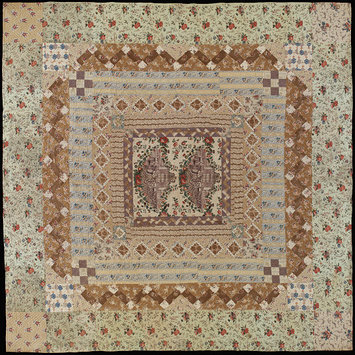 At the start of the 19th century, the British market was flooded with a new range of printed cottons. They were used for clothing and furnishings, including the creation of light, bright coverings for the bedroom. Printed textile panels became popular. Many celebrated military victories and coronations. Some were associated with particular causes. Women began to include such panels in their patchwork, revealing an engagement with politics and public debates.

The cotton panel at the centre of this bedcover was printed to celebrate the coronation of Queen Victoria in 1838. It shows the moment in Westminster Abbey when the crown was placed on her head. The youth and charm of the 19-year-old Victoria captured the public imagination, and fabrics such as this were a popular way of declaring patriotism and loyalty within the home.

Quilted patchwork bed cover of roller-printed cottons. In the centre is a square panel from a commemorative textile showing two repeats of the coronation of Queen Victoria. The cotton includes the royal coat of arms at the head of each repeat, plus representations of the rose, thistle and shamrock. The panel is surrounded by a series of seven wide patchwork borders of printed cottons dating from the first half of the nineteenth century. The reverse is cream cotton. Quilted in running stitch in cotton thread with a pattern of interlacing circles, leaves, chevrons and other geometric shapes. Lined with cotton.

The donor came from Yokall, Burton-on-Trent. She inherited the quilt from her aunt and believed that it may have been kept in the family.

Historical significance: From the time of her coronation, the image of Queen Victoria captured the public imagination. Her portrait could be found throughout the country: in magazines and advertisements, and on commemorative textiles such as this one. Victoria’s youth (she was crowned at the age of 19) and charm were perceived by many as a new start for the monarchy. After witnessing the throngs of people that turned out for her formal procession, Queen Victoria wrote:
'...many as there were the day I went to the City, it was nothing – nothing, to the multitudes, the millions, of my loyal subjects who were assembled in every spot to witness the Procession. Their good-humour and excessive loyalty was beyond everything and I really cannot say how proud I feel to be the Queen of such a Nation.'

The textile at the centre of this quilt celebrates the coronation of Queen Victoria that took place in 1838. It shows the scene in Westminster Abbey when the crown was placed on her head. Commemorative prints were particularly popular in the first quarter of the nineteenth century, but as this example shows, printers continued to view royal events as lucrative subjects for textiles. As Linda Parry has shown, the design is loosely based on an original engraving by the lithographic artist G.E. Maddeley, but the image has been distorted and simplified to suit the printing process. The reduction in the quality of both design and printing suggests that it was made primarily for export, so it is interesting to note that a second quilt with this textile exists in America, and forms part of the collections of the Munson-Williams-Proctor Arts Institute in Utica, New York State.

The cotton panel at the centre of this bedcover was printed to celebrate the coronation of Queen Victoria in 1838. It shows the moment in Westminster Abbey when the crown was placed on her head. The youth and charm of the 19-year-old Victoria captured the public imagination, and fabrics such as this were a popular way of declaring patriotism and loyalty within the home. 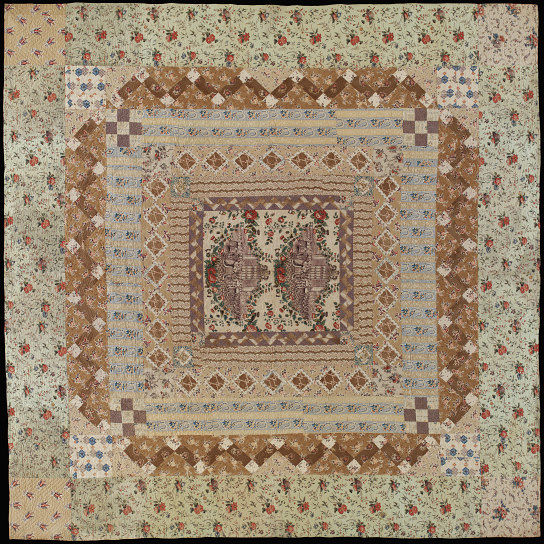