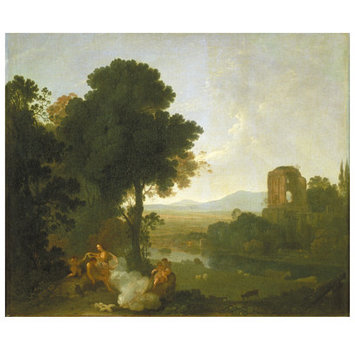 Classical Landscape with Venus and Adonis

The subject is taken from the Metamorphoses, a series of mythological tales in verse by the ancient Roman poet Ovid, which was a favourite source for Wilson in his later years.

It shows the artist at the height of his powers, reinterpreting the classical landscape of Claude Lorrain in seventeenth-century Italy for a late eighteenth-century British audience.

The ruined building appears in other compositions by Wilson, and is recorded in his 1752 Italian sketchbook, also in the V&A collection; it has been identified as an ancient tomb known as the Sedia di Diavolo, in the Roman Campagna, and may refer to the tragically early death of Adonis.

Oil on canvas depicting a classical landscape with Venus and Adonis.

Historical significance: Richard Wilson was a Welsh painter who had studied in Italy. Dutch landscape painting, particularly the work of Aelbert Cuyp, also influenced him. Wilson's patrons were the wealthy elite who sent their sons on the Grand Tour. He had begun as a portraitist, but in about 1752 gave up portrait painting in favour of landscapes. He continued to paint landscapes in the Italian manner even after he returned to Britain. Wilson was a founder member of the Royal Academy and enjoyed considerable success until the early 1770s. Although his career then went into decline, his treatment of landscape strongly influenced the next generation of artists, particularly J.M.W. Turner.

The attribution on acquisition was that the landscape was by Wilson and the figures by Cipriani. This was doubted by Brinsley Ford and Douglas Cooper (note on Departmental Files [now lost]) and by W. G. Constable [original note also now lost]. It is accepted as an autograph Wilson by Solkin." [David H. Solkin, Richard Wilson: The Landscape of Reaction, The Tate Gallery, 1982, cat. no. 70., p.186-7. Quoted in full below].

Classical Landscape with Venus and Adonis, c.1754-5
Inscribed on the plinth, lower right, 'R.W.'
This little-known picture is one of Wilson's earliest illustrations to Ovid's Metamorphoses, an antique text that was to provide him with subjects for most of his later historical landscapes. Doubtless his choice of Ovid was a strategic one, designed not only to display his own intellectual capacities, but also to invoke the example of Claude Lorrain, who had often included Ovidian figures in his classical scenes. Perhaps because Claude himself had never depicted the story of Venus and Adonis (Metamorphoses, Book x), Wilson turned to elsewhere for inspiration when he came to design his figures: these appear to be closely based on Zuccarelli's 'Diana Appearing to Endymion' (H. M. The Queen, Windsor Castle), which our painter must have seen at the home of Consul Joseph Smith in Venice. [see M. Levey, The Later Italian Pictures in the Collection of Her Majesty the Queen, London 1964, pl.196]. But in all other respects the 'Venus and Adonis' shows Wilson at the height of his infatuation with Claude. Its design resembles that of a Claude 'flight into Egypt' of 1639 (Notre Dame University Art Gallery), which was still in Rome in the eighteenth century. Wilson's palette, too, is overwhelmingly Claudean, particularly in the background of the landscape, while his treatment of the foliage is equally derivative . he seems to have encountered no little difficulty in emulating Claude's technique of glazing thin layers of translucent paint one over the other. Perhaps because he did not wait long enough for each layer to dry, or due to the use of an unstable medium, Wilson's picture has undergone extensive cracking - a problem that reoocurs in several of his oils from this period. Of these a 'Diana and Actaeon' of 1754 (Constable, pl. 17a) and the 'Ego Fui in Arcadia' of 1755 [this exhibition, cat. no. 74] bear the closest stylistic affinities to the present work. The ancient ruin on the right-hand side reappears in several other Wilson landscapes, including one brief sketch in the V&A sketchbook of 1752 [this exhibition, no.21, E.3586-1922] [The same ruin also figures prominently in Wilson's 'Via Nomentana' of 1766, this exhibition, cat. no.123]. This building has been identified as the Sedia di Diavolo, which stands near to the Via Nomentana in the Roman Campagna. Although the 'Venus and Adonis' is far from being in optimum condition, there is no reason to doubt the traditional attribution to Wilson, whose initials appear on the plinth at lower right. He probably sold this work after his departure from Italy to Oldfield Bowles, on of his most fervent admirers [The 'Venus and Adonis' was sold by one of Bowles' descendants to H.A.J. Munro of Novar at some point during the mid-nineteenth century; see Christie's cat. of 6 April 1878, lot 61]. 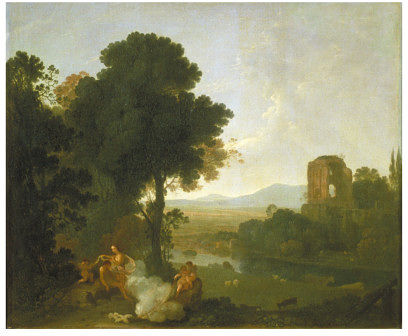