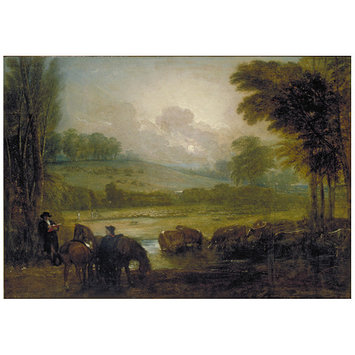 West was the first American-born artist to gain international repute, becoming Historical Painter to King George III and second President of the Royal Academy. His ambitions were grand, and in later years grandiose: his apocalyptic Death on a Pale Horse measures 4.47 by 7.65 metres. Of his known oeuvre of nearly 750 works, only about thirty are landscapes. This fine example shows the artist himself, sketching on the left; his companion is James Dyer, a former soldier in the Horse Guards who became a life model at the Royal Academy Schools and was West's manservant for fifty years. It is one of a group of seven views in and around Windsor, where he rented a house from about 1780, presumably because he had been commissioned for a series of paintings in the Royal Chapel in Windsor Castle.

Oil on paper laid on canvas

Historical significance: Benjamin West (1738-1820) was born in Springfield, Pennsylvania, then a colony in British America. His parents were both from Quaker families. His early interest in painting was encouraged by meeting a young English artist, William Williams, who lent him books on the theory of art by Charles Alphonse Du Fresnoy and Jonathan Richardson. By the early 1750s, still in his mid-teens, he was painting overmantles and portraits. West painted his first history painting in 1756 and attracted the support of the Rev. W. Smith in Philadelphia, to which he moved the same year. With Smith's continuing support West travelled to Italy in 1760 and stayed until 1763, funding his stay by painting copies after old masters for wealthy Philadelphians. In 1763 he moved to London, planning to stay for a short while and then return home. He soon attracted the attention both of fellow artists and future patrons as a self-taught prodigy with the potential to be a great history painter. He was to live in Britain for the rest of his life.

West was the first American-born artist to gain international repute, becoming Historical Painter to King George III and second President of the Royal Academy. His ambitions were grand, and in later years grandiose: his apocalyptic Death on a Pale Horse measures 4.47 by 7.65 metres. He was also prolific, his known oeuvre produced during a 60 year career comprising over 700 works. His reputation at his death in 1820 was still high, but from the 1840s had gone into decline. In recent years his work and influence has been reappraised, particularly in Helmut von Erffa's and Allen Staley's Paintings of Benjamin West (1986).

See No. 475, which appeared together with No. 476 at the Royal Academy in 1799. Whereas the former shows the view from Snow Hill in Windsor Great Park, the latter depicts the hill itself. It does not show Windsor Castle, or any other marked topographical features. The equestrian statue of George III, the so-called "Copper Horse," which now stands atop of Snow Hill at the end of the Long Walk, was only erected between 1829 and 1831.
The early lists of West's works and the Robins sale catalogue of May 1829, both indicate that No. 476 includes a self-portrait of the artist sketching. Additionally, the Robins catalogue identifies his companion as James Dyer, a former soldier in the Horse Guards and life model at the Royal Academy schools, who was West's servant for fifty years. According to the same source, the two horses are also portraits of West's own saddle horses.
Ruth Kraemer has loosely associated two small drawings in the Pierpont Morgan Library with No. 476; one shows a man wearing a broad-rimmed hat similar to that worn by West in the painting, while in the other the subject, who leans against a horse, wears a long coat and crosses his legs, as does West as he leans against a tree in No. 476. (1)

Dillenberger: "Published Lists of West's Paintings" and "checklist of Known Religious Works by West," in Benjamin West: The Context of His Life's Work, by John Dillenberger, San Antonio, 1977, Appendices I and V, PP.129-90 and 210-15. (Dillenberger's Appendix I is a concordance of all the earlier lists cited above except that in the Universal Magazine, plus West's account of 1801 of his works for George III [which is cited in the PROVENANCES in this catalogue]. It is prefaced by a brief discussion of the publications in which they appeared.) 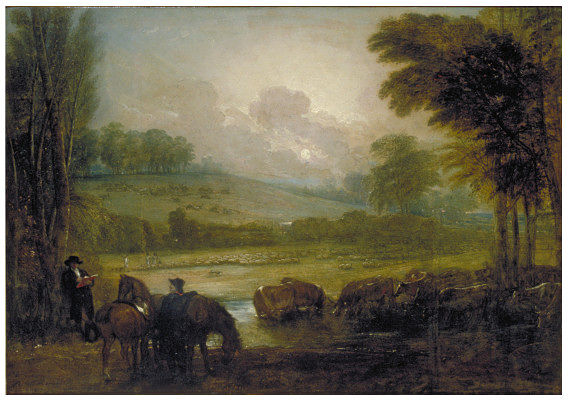