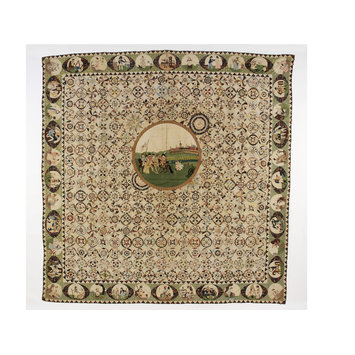 This is rare example of a figurative coverlet that has been entirely pieced over paper; an incredibly labour-intensive endeavour which testifies to both the design and needlework skills of the maker.

Drawing on popular printed images, this patchwork coverlet was worked during a period of intense naval euphoria. The central scene shows King George III reviewing the volunteer troops, and is based on a painting by John Singleton Copley (1738-1815) 'His Majesty reviewing the volunteer corps' (1799). On 4 June 1799, King George III carried out a review of 15,000 volunteer troops at Hyde Park, London. Celebrating the King's 61st birthday, the occasion was also a carefully calculated show of military strength at a time of possible French invasion.

In several scenes, a small, red-haired figure appears alongside soldiers and sailors. Absent from the original prints, this may well be a self-portrait of the maker.

Bed cover of unlined patchwork made from a wide variety of plain and printed cottons. At the centre is a circular figurative panel that has been pieced and embroidered, and showing the review of volunteer troops in Hyde Park by King George III. The ground is of white cotton with a repeating pieced design of segmented circles in printed cottons. Each circle has a variety of different patterns within it, including stars, squares, crosses, diamonds and flowers. The cottons include coral-like shapes, dots, florals, hearts and anchors. Many are block-printed cottons from the late eighteenth century, and some were originally glazed. The central panel may have been inserted after the completion of this patchwork, as it cuts through two pieced representations of the sun and the moon. It suggests that the two may once have been separate patchwork projects, although they may have been worked by the same hand as both the stitching and textiles are consistent.

The border comprises of 40 pieced vignettes, alternately circular and oval in shape showing patriotic, domestic and naval scenes taken from contemporary prints and paintings. The number of patches per scene ranges from around 23 to 45. Additional embroidery has been added to the central panel and border worked with silk threads in chain, satin, and long and short stitches. There is also evidence of drawing, and some areas have been stamped with black ink, such as the small birds in the central medallion. The cover is unlined and small fragments of the original paper template can be found in several areas.

Each of the following vignettes appears in one of the panels in the border: Image of printing press, Female hay-making, Sailor and lover, Female bee keeping, After the battle, Mother embrace with servant, Unmounted horseman with horse, Female spinner and church, Nelson (?) with drawn sword, Female musician with guitar, Hussar in cannon, Female musician with harpsichord, Sailor with oars, Female sawing with windmill, Mounted soldier, Mother and child reading prayer, Soldier kneeling (?) victory, Woman in the pose with a dog, Sailors drinking and smoking, Woman with shield and 3 crowns, Woman with staff and twig, Britannia, Sailor and lover with ship and castle, a female water carrier with dog, Soldier with seated lover, Mother and kneeling child, Returned soldier, Female with flag and castle, Person the deathbed, female with dead songbird, standing soldier with sword, seated female with songbird, injured sailor, standing female with cup, departing soldier, female with child and nurse, and woman with watering can. Several vignettes have inscriptions embroidered within them, including on a soldier's letter, and the Lord's Prayer being read by a mother to her child.

The central image is inspired by a print by John Singleton Copley of 1799.

The donor came from Worthing, Sussex. The cover is said to have been handed down within her husband's family.

Historical significance: Military: Under the centrepiece, the border shows three females, two of whom could possibly represent Britannia with the Greek hoplon shield marked with the Union Jack, and Poseidon's three-pronged trident. Britannia is often shown standing in the ocean, representing British naval power, but here she appears seated.

Family: Several other images of women appear on the quilt, some of whom gaze at the men standing beside them. Others are shown in scenes suggesting longing and sorrow. George III was married to Duchess Sophia Charlotte of Mecklenburg-Strelitz. Children are also depicted in the quilt. A girl appears several times with red hair as well as others who are seen saying farewell, standing or sitting with figures who are possibly their mothers. George III had 15 children - nine sons and six daughters.

Design: The Mariner's Compass design used in the patchwork emphasises the naval theme of the bedcover which was worked at a period of intense national euphoria following England's naval successes against the Spanish and French fleets.

A number of printed cottons manufactured at this time also show naval themes, especially Nelson's victories and his death at Trafalgar in October 1805.

The coverlet was worked during a period of intense naval euphoria. British naval power was seen as crucial to winning the war against Napoleon, and this coverlet draws on many of the patriotic prints circulating at the time. Prints of Britannia ruling the waves were immensely popular, as were aspirational prints, including fashion plates that showed the public a desirable, modern world. One of the border vignettes depicts a woman at a spinet, which has been taken from The Lady’s Magazine of 1798. Another scene showing two officers reminiscing is inspired by Robert Dighton's, 'Descriptions of Battles by Land and Sea', published in March 1801.

Drawing on popular printed images as a source of inspiration, this embroidered patchwork coverlet was worked during a period of naval and military euphoria. The central medallion shows George III reviewing volunteer troops in London's Hyde Park. Many of the vignettes suggest the maker's loyalty to the Crown. In several scenes, a small, red-haired figure appears alongside soldiers and sailors. This may well be a self-portrait of the maker. 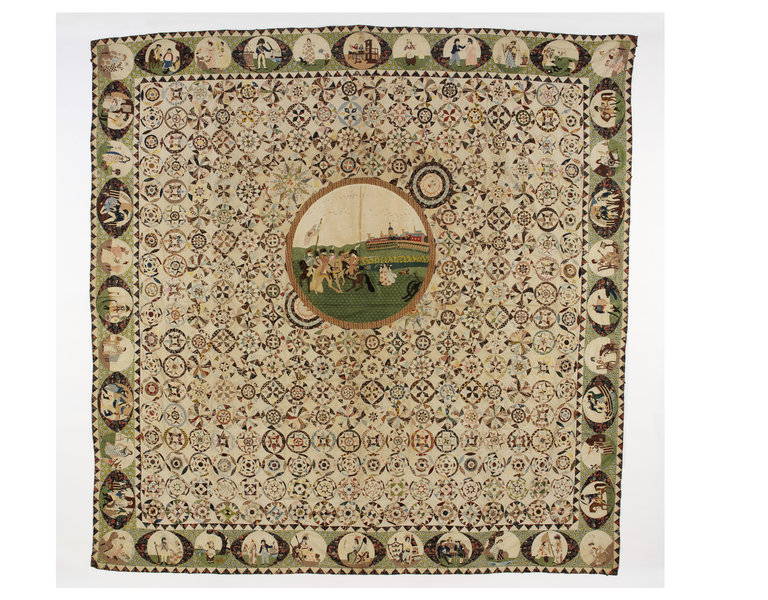