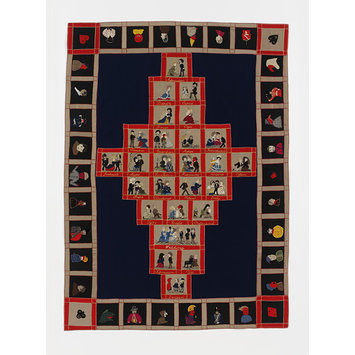 This cover or hanging was probably made between 1875 and 1885, given the fashionable dress of its characters. It is made using a piecing technique similar to marquetry, known as 'inlay' or 'intarsia'. Cut-out fabric shapes are inlaid into an identical cut-out space in another fabric (usually a heavy woollen cloth). They are then stitched from the reverse side, using tiny stitches that are not visible on the front. Applique has also been widely used, whereby shaped pieces of fabric are stitched on top of the ground material in order to create the design.

The central panels depict the various rituals and emotions associated with courtship, moving from ‘Admiration’ to ‘Zingari’ (an archaic term for the Romany community). These images are framed by a border that makes reference to an array of cultural figures and symbols, including fairground favourites such as Mr Punch, and gaming card motifs in the four corners. Coupled with the size of the object, these references suggest that it may have been created in relation to a card game. Textiles with playing-card motifs became particularly popular in the 1880s and ’90s. It was also common to associate love and gambling at this time. In George Eliot’s novel Daniel Deronda (1876) games of chance are played both around the gaming table and with the heart. The gestures of the central figures on the cover also suggest the widespread appeal of melodrama. Prints, plays, novels and the music hall all helped to popularize the form and many of its associated characters.

The figurative scenes are created from applied and inlaid wool, with embroidered details in silk thread. The border consists of 30 squares of black broadcloth, outlined with thin borders of beige broadcloth. In addition to the love scenes in the centre, the border consists of 30 squares of black felt, containing heads of nineteenth century characters and figures from everyday life, including Punch, clowns, policemen, soldiers and sailors. The four corners contain the four suits from traditional playing cards. The seams of the pieced design have been outlined in a decorative cross-stitch. Lined in blue wool broadcloth. The object shows evidence of at least two hands.

The donor came from Beckenham, Kent. According to the her family history, the object was made by a male ancestor whilst on a long sea voyage.

Said to have been worked on a long sea voyage, this appliqué cover depicts an A to Z of scenes, from 'Admiration' to 'Zingari' (an Italian term once used in English to refer to Gypsies). Fashionably dressed men and women engage in the various rituals of courtship. The presence of gaming motifs suggests that the imagery may have been adapted from a card game of the period. 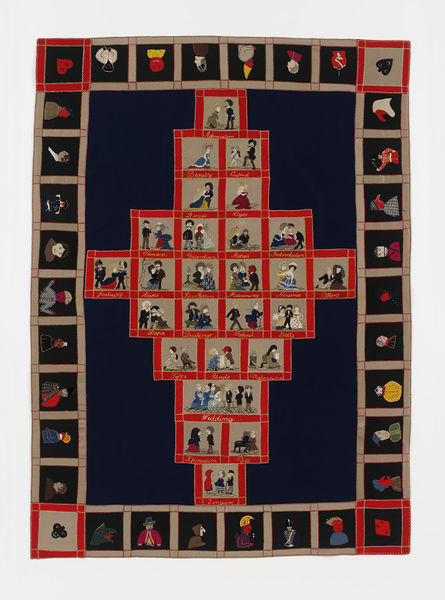