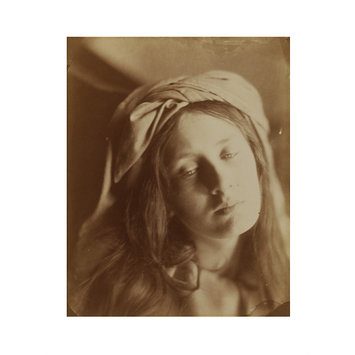 Cameron based the model’s pose, drapery and sad expression on a painting attributed to Guido Reni that was famous at the time. The subject is the 16th-century Italian noblewoman Beatrice Cenci, executed for arranging the murder of her abusive father. One review admired Cameron’s soft rendering of ‘the pensive sweetness of the expression of the original picture’ while another mocked her for claiming to have photographed a historical figure ‘from the life’.

A photograph of a woman (May Prinsep) from the shoulders up as a 3/4 profile. Her hair is loose and the top of her head is covered by a large turban.

This photograph was produced by Julia Margaret Cameron (1815-1879) as a work of fine art to be shown in the context of a museum or gallery. It was not intended for mass reproduction, or as a portrait of the sitter, but as an artistic expression in its own right.

Although posed as a tragic heroine from sixteenth-century Rome, the model Mary Emily (May) Prinsep (1853-1931) was the adopted daughter of Julia Margaret Cameron's brother-in-law. As well as posing for several of Cameron's photographs (Cameron considered her particularly well-suited to Italian subjects), May Prinsep also sat for the painter and sculptor George Frederick Watts. (1817-1904).

The 'Beatrice' represented is not the heroine of Dante's writings painted by Cameron's contemporaries, including Dante Gabrielle Rosetti (1828-1882), but Beatrice Cenci, a sixteen year old who in 1599 was hanged for her role in the murder of her father, who had raped and abused her. This subject was popularised during the nineteenth-century by a poetic drama by Percy Bysshe Shelley called 'The Cenci', amongst other literary works. Here Cameron has transposed the composition from a painting of 'La Cenci' previously attributed to Guido Reni. She would have known this painting from reproductions of Italian art circulated by The Arundel Society, of which she was a member.
Like the painter, Cameron treats the subject sympathetically, and poses her model with titled head and sad, resigned expression. However, the closer focus on the head heightens the moral drama of a subject that would have appeared both noble and dangerous to contemporary audiences.

[]
In her pioneering photography Julia Margaret Cameron pursued the Aesthetic ideal of 'art for art's sake', in which beauty is the only real purpose of art. Here she shows her niece, May Prinsep, as Beatrice Cenci, who was hanged in Rome in 1599 for killing her cruel father. Beatrice became a romantic heroine when her story was taken up by Percy Bysshe Shelley in his play 'The Cenci' (1819). By concentrating on the model's head and melancholy expression, Cameron suggests that the subject's beauty is intensified by her sad plight. []
Julia Margaret Cameron: A Bicentenary Exhibition

Cameron based the pose, drapery, and sad expression of her model on a painting attributed to Guido Reni. The subject is the 16th-century Italian noblewoman Beatrice Cenci who was executed for arranging the murder of her abusive father. One review admired Cameron’s soft rendering of ‘the pensive sweetness of the expression of the original picture’ while another mocked her for claiming to have photographed a historical figure ‘from the life’.

Another print of this was inscribed by Mrs Cameron: 'Study of the Beatrice Cenci from May Prinsep' (the photographer's niece). 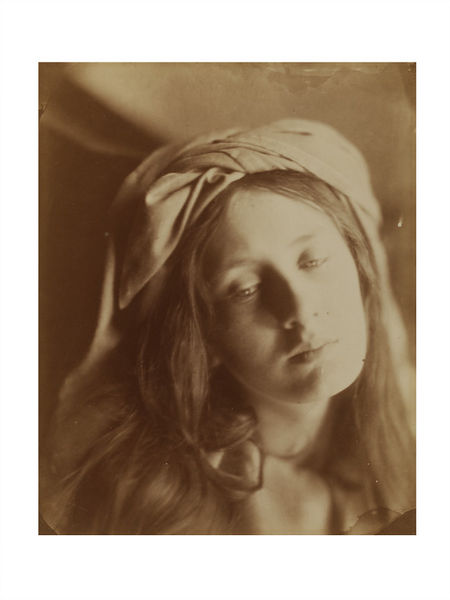