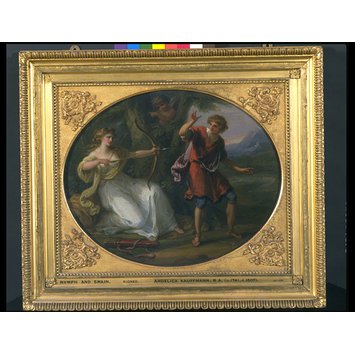 A Nymph Drawing Her Bow on a Youth

This composition was executed c. 1780 by A. Kauffmann as an illustration of a poem written by Francis Davidson (c. 1570-c. 1620) and compiled by Thomas Percy in his anthology entitled Reliques of Ancient Poetry (1765). The painting forms a pair with 23-1886, which illustrates the beginning of the poem whereas the present painting shows the second part of it. It is a fine example of neo-classical design inspired by poetic sources often contemporary even when they appear entirely classical in content.

A nymph bends her bow at a shepherd while Cupid half-hidden in the trees points at her.

'Angelica Kauffman'
Signed by the artist

Historical significance: Angelica Kauffman's pictures were particularly popular in England and were used in interior decorations such as murals and designs painted on furniture, mostly in cooperation with the architect Robert Adam. Her designs were often distributed as prints and this particular composition was engraved by G.S. and J.G. Facius (The British Museum, London - 1873,0809.291).
The painting forms a pair with 23-1886, which subject matter has been identified as an illustration of a poem written by Francis (?) Davidson, c. 1620, and compiled by Thomas Percy in his anthology entitled Reliques of Ancient Poetry (1765). The painting illustrates the second part of the poem: the nymph awakes and seizes her bow and bends it at the shepherd with one of Cupid's arrow, whereas the beginning of the poem is shown in 23-1886: a nymph is asleep and a shepherd observes her while Cupid replaces one of her arrows with his own.
Another oval composition (Old Westbury Gardens, Long Island, New York) of the exact same dimension shows the same nymph and shepherd in another situation. This suggests that the three paintings originally formed an ensemble. The Long Island painting was formerly in the collection of Sir Charles Rushout and bought by him from the collection of W. Dallas O. Grieg, Esp., in 1884. The date of acquisition of the present painting suggests that they share the same provenance.

British Galleries:
Angelica Kauffmann was the most famous female artist in 18th-century Britain. She was especially well known for her pictures of classical and historical subjects. Many of them, like the two paintings shown here, were made into prints for decorating rooms. [27/03/2003]
BG Display Note: Label: The nymph has woken and shoots at the shepherd, who, far from dying, falls further in love with the nymph. Puzzled, she tests one of her arrows upon herself and immediately falls in love with her prey. Cupid congratulates himself. Kauffmann was born in Switzerland and lived in England between 1766 and 1781. She specialised in neo-classical portraits and subjects from classical mythology. [27/03/2003] 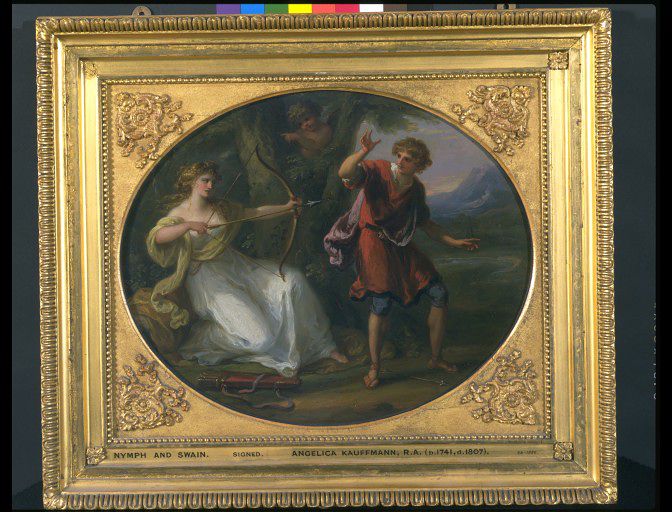