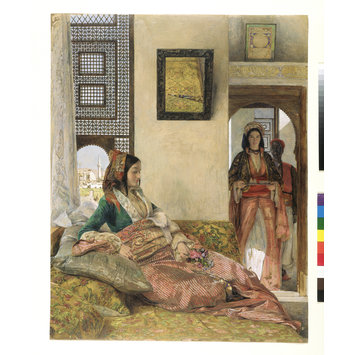 Life in the Hareem, Cairo

Object Type
At first sight Life in the Hareem, Cairo is another `Orientalist' picture with no obvious story. Yet the posy of flowers held in the lap of the main figure is a love letter, in the language of flowers, used in Turkey and Egypt as well as Britain. This was a favourite theme in Lewis's work. The whole scene could be interpreted as a showing a woman about to take coffee with her confidante to discuss the newly arrived love letter and its implicit offer. Then they will read the future in the coffee grounds in the traditional manner (still practised in Cairo), to see how the affair may turn out.

People
Lewis painted various versions of this theme. He arrived in Egypt in 1841 and lived for nearly a decade as a wealthy Turk in a grand 16th-century house in Cairo. Lewis was obliged to do this, as at that time his neighbours would not have tolerated Western customs in this district of the City. In 1847 he married Marian Harper, who appears as a model in many of his pictures, including this one. In Cairo he lived with his bride like a Turkish Bey, or grandee, in everything except the actual practice of the faith of Islam, so the decorous pictures of Marian in her robes in that splendid house are not really fantasies at all.

View of the the interior of the women's quarters of a Mamluk house in Cairo, a richly dressed woman reclining on cushions, holding a posy of flowers and another woman bringing a tray with coffee cups. In the background, beyond the doorway, a male African servant.

Walton on Thames (made)

According to Robert Hewison, (see Tate Exhibition catalogue below) this is probably the painting that was exhibited at the Royal Academy in 1858 as number 122, `An inmate of the Hhareem, Cairo.' It was bought by James John Ruskin, the father of John Ruskin., as a gift for his son. Joan and Joseph Severn, John Ruskin's guardians, began to sell off works from his collection in the 1890s. According to Museum records this painting was bought from the dealers Thomas Agnew & Sons on the advice of George Howard, 9th Earl of Carlisle, a noted painter and friend of the Pre-Raphaelites. The spelling of Hhareem with a double `h' is Lewis's attempt to represent the Arabic letter `ha' which is more strongly aspirated than the English `h' sound. Lewis had Arabic lessons while he lived in Cairo.

Water and bodycolour painting showing a view of the the interior of the women's quarters of a Mamluk house in Cairo.

The main figure holds a posy of flowers. In the language of flowers, used in Turkey and Egypt as well as Britain, this represents a love letter. The scene suggests that the woman may wish to discuss the newly arrived letter with her confidante. They are about to take cofee.

Purchased 1893
Museum no. 679-1893 []
British Galleries:
The artist, J.F. Lewis, had lived in Cairo. He painted various versions of this theme, drawing on his personal observations. Pictures of beautiful women in exotic dress and settings, whether based on fact or fantasy, were popular. Such images inspired fashions for interior decoration and dress. [27/03/2003] 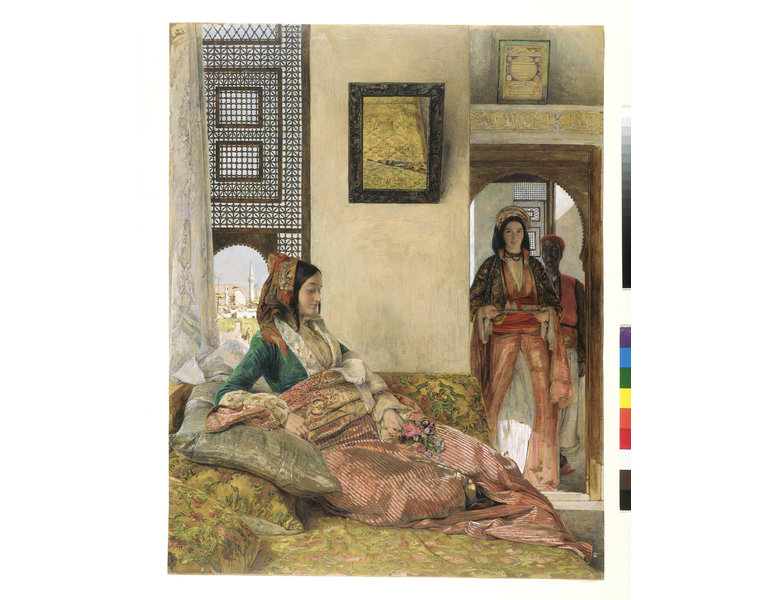