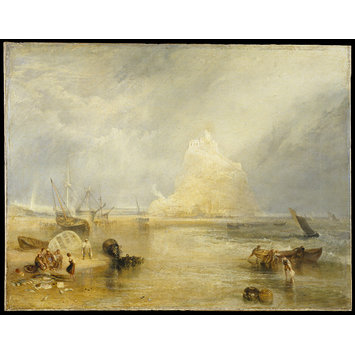 The island of St Michael's Mount is the site of a medieval monastery. Its harbour is linked to the mainland by a causeway at low tide. This composition derives from sketches made in 1811. One critic thought it 'unsubstantial and visionary'. It is probably a pair with Line Fishing, Off Hastings, also in the V&A.

Oil on canvas depicting St. Michael's Mount, dramatically dominating the scene in the background, while in the foreground fisherfolk work amongst boats on the sands

Historical significance: Turner drew St. Michael's Mount several times: in a 1811 sketchbook, in a watercolour of about 1812 for the engraving in the Southern Coast series in 1814 (Wilton 445, repr), as an illustration to Milton's Poetical Works of about 1834 published 1835 (Wilton 1269, repr), and a watercolour of about 1836 to be engraved for England and Wales in 1838 (Wilton 880, repr). The present work shows the same view as the 1812 watercolour, although the height of the Mount is increased.

Arnold's Magazine (July 1834) thought it 'one of the most conspicuous' of the exhibits, and 'although the scene cannot be said to convey a literal idea of the object chosen for representation, we have little doubt it corresponds precisely with that which the artist had conjured up in his imagination'. The Morning Post critic (17 July 1834) described it as 'a favourable specimen of his new style of painting; but we ourselves are old-fashioned enough to prefer his discarded one as coming more within the limits of our comprehension, and nearer, as we think, to nature'. The Spectator (10 May 1834) compared it with Callcott's 'Recollection of the Campagna of Rome': 'The difference of these, the two first English landscape painters, is made strikingly evident. Callcott's colours look opaque and heavy, and Turner's painting unsubstantial and visionary' . Twenty years later, Waagen thought that 'The bold, precipitous rock, and the manner in which it is lighted, give this picture a poetical charm' (Treasures of Art in Great Britain 1854, II, p30S). A small (16.5 X 22.2 cm/6 ½ X 8 ¾ ins) oil sketch was recorded in a private collection in 1952, as was a copy after the work in 1972. Another copy (87.6 X 113.1 cm/ 34½ × 44 ½ ins), supposedly also painted in 1834, was in the original Russell-Cotes collection given to the museum of that name in Bournemouth. 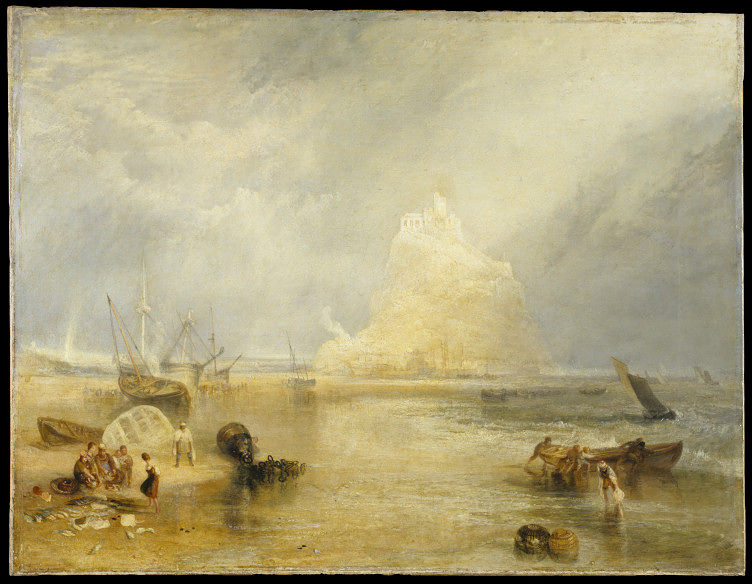