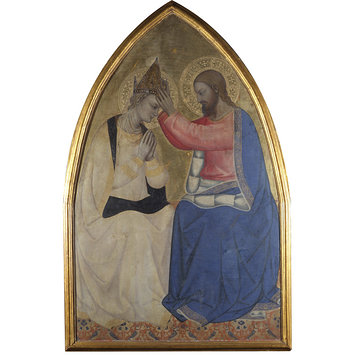 The Coronation of the Virgin

Nardo di Cione (ca.1320-1365/66) was the brother of Andrea di Cione called Orcagna and Jacopo di Cione with whom he often collaborated. They ran together one of the leading Florentine workshops in the mid-14th century. He executed a number of frescoes, a very few of which have survived in poor conditions and several polyptych panels.

This panel showing Christ in a red and blue dress in the act of crowning the Virgin, in black and white garments, is believed to have constituted the central panel of a triptych. The coronation of the Virgin was a popular subject in Gothic and late Gothic Italy up to the 18th century although its imagery considerably evolved over the centuries.

In a pointed arched gilded frame, Christ dressed in red and blue crowns the Virgin, who wears a black and white garments; side by side, their bodies are represented three-quarter full-length whereas their faces are shown in profile on a plain golden background. They stand on a blue, red and gold cloth floor-covering and wear punch marked halos.

Bought by C. A. Ionides on 26/02/1883, as a work by Giotto, formerly in the T. Maring collection (his inventory, private collection). Bequeathed by Constantine Alexander Ionides, 1900

Historical significance: Tuscan late-Gothic Coronations were usually triptychs, like that of 1420 by Rossello di Jacopo Franchi (Accademia, Florence). Typically the central panel showed the throne raised on steps or surrounded by angels in unarticulated space, with saints in the side panels. A profound change happened in Florentine painting between 1420 and 1440 with the creation of altarpieces built for unified picture fields with the introduction of a landscape or architectural background (see Fra Filippo Lippi’s Coronation of the Virgin known as the Maringhi Coronation, Uffizi, Florence and the Marsuppini Coronation of the Virgin, Pinacoteca vaticana, Vatican – which was recut as a triptych much later).
The present work is believed to have constituted the central part of a triptych, a reconstruction of which has been proposed by Richard Offner in his Corpus of Florentine Painting, New York, 1960, vol. ii, with the helps of two side panels from the Alte Pinakothek, Munich, representing full length standing saints.
Two pinnacles, stylistically compatible with the Munich panels and the V&A altarpiece, recently appeared on the London art market (Jan. 2011). Technical examinations have revealed the presence of a canvas under the paint layer, most likely transferred on to a wood panel at a later date. The Munich panels also revealed the presence of a canvas whereas CAI.104 does not show any sign of it. It seems therefore really unlikely that the two pinnacles, the Munich panels and the V&A Coronation are connected.
However the V&A panel must been reduced and cut off on the edges. The bottom of the panel most likely showed a group of angels attending the ceremony and playing musical instruments such as in these two Coronation of the Virgin respectively by Agnolo Gaddi, The National Gallery, London, and Giotto, Santa Croce, Florence. These large compositions tent to be chopped off and sold separately to increase profits during the 19th century. An interesting example of this practice stands in the three panels by the workshop of Giovanni del Biondo, housed in the Walter Art Gallery, Liverpool, which originally formed a unique panel and show a Coronation of the Virgin and Angels playing musical instruments (Inv. 2782, 6110 and 6120).
The attribution of the V&A painting was much questioned over the past years although scholars accordingly consider it now as a work by Nardo di Cione and assistants.
The space is formless, inspired by the example of Byzantine icons, such as in the works of Bernardo Gaddi, Lorenzo Monaco and Jacopo di Cione but still have Christ as the main character along with the Virgin while from the 1440s, God the Father begins to replace the Son. This change may illustrate the resolution of the Filioque controversy at the Council of Florence (1439), which emphasized the close identity of the Father and Son, as a gesture of reconciliation with the Greek Church. Representation of Christ persisted, for example in the Marsuppini Coronation for the Olivaetans of Arezzo, and eventually prevailed as the nominal union of Easter and Western Churches was neglected.
The Coronation of the Virgin was the most elaborate subject to be commonly treated in the 14th and 15th-century altarpieces, epitomised in Florence by the works of Fra Filippo Lippi and Fra Angelico who appears to break with the late Gothic tradition and create a new spatial dynamic for this kind of imagery. The scene is the final episode in the Life of the Virgin, and follows her Assumption - not yet dogma in the Middle Ages - or Dormition. The scriptural base is found in the Song of Songs (4.8), Psalms (44.11-12) and Revelation (12.1-7). The title "Queen of Heaven", or Regina Coeli, for Mary goes back to at least the 12th century.
Other coronations such as Jacopo di Cione’s, Nardo’s brother, Coronation of the Virgin of 1372-3 for the Florentine Mint (currently in the Accademia, Florence) show at the same period another typology and are depicted on a single vertical panel with two principal saints standing alongside the throne, while rows of other saints kneel across the front of the picture. 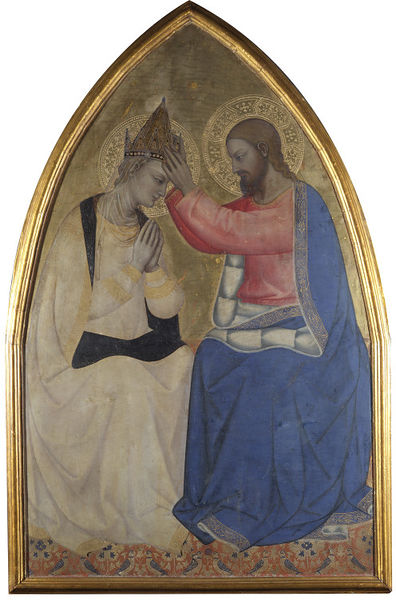