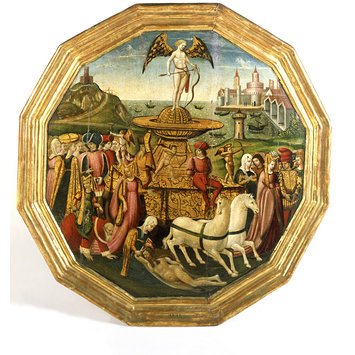 The Triumph of Love

Apollonio di Giovanni (ca.1416-1465) was born in Florence where he trained as an illuminator in the circle of Bartolomeo di Fruosino (ca.1366-1441) and Battista di Biagio Sanguini (1393-1451). He became a member of the Arte dei Medici e degli Speziali in 1442 and of the Compania di S. Luca in 1443. He spent almost all his working life in the workshop he ran in partnership with Marco del Buono di Marco (ca. 1403-after 1480), with whom he produced decorated furniture panels (‘cassoni’, wedding chests, ‘deschi da parto’, birth trays , ‘spalliere’, wainscotting) as well as illuminated manuscripts.

This desco da parto was a ceremonial birth tray offered on the occasion of a marriage or a birth during the 15th century and its imagery, a Triumph of Love, derives from the Italian humanist Petrarch’s series of poems called I Trionfi, composed during the second half of the 14th century. The coat of arms on its reverse has been identified as those of the Samminiato and the Gianfigliazzi families of Florence. As the marriage of Francesco da San Miniato and Constanza Gianfigliazzi is recorded in 1537 or 1547, and the form of the shield bearing their arms is unknown prior to the 1520s, this tray would appear to have been partially re-painted in or after 1537.

In the centre is a chariot driven by two white horses and surmounted by a sphere circled by a disk upon which stands a winged Cupid holding a bow and a an arrow, a group of figures surrounds the chariot and in the centre background is a sea dotted with ships between a fortress on a headland at the left and a fortified harbour on the right, with a row of open-fronted sheds for ship-building.

Historical significance: Formerly ascribed to the ‘Master of the Cassone’, this desco da parto (birth tray) as well as many other items were successively attributed to the Florentine workshop of Apollonio di Giovanni because of generic common features albeit they sometimes differ in quality.
E. Callmann, who accepted the attribution to Apollonio, noticed however that this desco does not conform to the shop’s style and justified it by the actual discoloration of the original pigments and the later repainting. Compare with the V&A cassone panel 5804-1859, this desco appears less refined and of inferior quality, especially in the drawing of the horses and of some figures such as the tied-hand red dressed man seated on the front edge of the chariot.
The present desco shows a ‘Triumph of Love’, a subject matter that became popular from the mid 15th century in Italy and especially in Florence, drawing upon the long poem I trionfi composed by the Florentine humanist Francesco Petrarch in the second half of the 14th century, which described a series of allegorical triumphal processions. The present scene illustrates the Triumph of Love, which is described thus:

‘Four steeds I saw, whiter than snow,
And on a fiery car a cruel youth,
With bow in hand and arrows at his side
No fear had he, nor armour wore, nor shield
But on his shoulders he had two great wings
Of a thousand hues; his body was all bare
And round about were mortals beyond count…’

The composition takes over the iconographic miniatures of illuminated manuscripts that reproduced the original text, including one of Triumph of Love attributed to Apollonio (Florence, Biblioteca Riccardiana, MS 1129, fol.1v). In the middle is the triumphal chariot of Love composed of a socle and a sphere circled by a disk which most likely represents the universe dominated by Cupid perched on the top of it. The power of Love is then embodied in the immediate foreground by two classical scenes: Dalilah shearing Samson (Judges, 16:4-20) as described by Petrarch and Phyllis (or Campaspe) astride on Aristotles’ back as narrated in a late medieval legend called Lai d’Aristote. These two instances of, respectively, a physical and an intellectual giant also appear in the miniature of this subject attributed to Apollonio, mentioned above. By the 1460s, the imagery of I Trionfi was being widely disseminated by engravings (see for instance the Triumph of Love attributed to Francesco Rosselli, ca. 1480-1490, The British Museum, London, Registration number:1845,0825.646)
The hand-tied men on the edge of the chariot echo the state of infirmity in which one is reduced by Love. On each side of the chariot are two groups of figures: on the right, the figures seem peaceful and quietly stand side by side whereas on the left, the figures look to discuss and perhaps argue with each other. These two groups could thus embodied two states of amorous concordia and discordia.
In the background of the scene is a harbour scene with merchant sailing ships and smaller craft between a fortress on a headland at the left and a fortified harbour on the right, with a row of open-fronted sheds for ship-building. This background could symbolically represent the world essentially composed, in the Renaissance mind, of towns, sea and landscapes.
The reverse was apparently repainted over eighty years after it was made, for Francesco da San Miniato and Constanza Gianfigliazzi. The extensive trade and use of second-hand goods in Renaissance Florence included such deluxe objects as the sumptuous book of hours made in 1488 for the marriage of Lucretia de’ Medici, which was re-used after her death in 1550 as a diplomatic gift to the Duke of Bavaria. Despite its valuation at 10 florins in 1492, Lorenzo de’ Medici’s own desco da parto only realised 3 florins in 1494/5 when it was auctioned off, with other possessions of the deposed ruling family. 144-1869 may have been a Samminiato or Gianfigliazzi heirloom, proudly re-used by members of a later generation, or simply an inexpensive gift acquired second-hand.
The Triumph of Love appears on five Florentine deschi da parto dating from between 1450 and 1475, most of which are attributed to Apollonio, and a further four are decorated with the related Petrarchian themes of The Triumph of Chastity and Fame. It is likely that such images of Petrarch’s Trionfi conditioned the appearance of the large decorated processional carts which replaced the lighter man-carried floats in Florentine public festivals during the fifteenth century. A carnival procession held in Florence in 1473 included an actual Triumph of Love. (Wackernagel 1981, pp.193-7; Truffi 1911, pp.67-9).

Deschi da parto were painted circular trays, usually produced in the same workshop that also supplied decorated furniture panels such as cassoni (wedding chests) and spalliere (wainscoting). They were used to carry food to the bedchamber on the occasion of the birth of a baby. They were usually decorated on the front with a variety of subjects sometimes based on a scene of male or female dominance depending on the sex of the baby while the back bears the coat of arms or impresa (personal emblem) of the family concerned.
The earliest documentary reference to a desco da parto is in a Florentine inventory of 1383 (see for instance an early Trecento example in the Metropolitan Museum, New York) and the oldest surviving examples date from the 1370s. A number are depicted in paintings, and it has been estimated from their incidence in inventories that over 40% of the households in fifteenth century Florence had at least one such tray. Deschi were painted not only for wealthy patrons, but also those of more modest means such as butchers, bakers, and notaries. They could be commissioned or purchased ready-made. 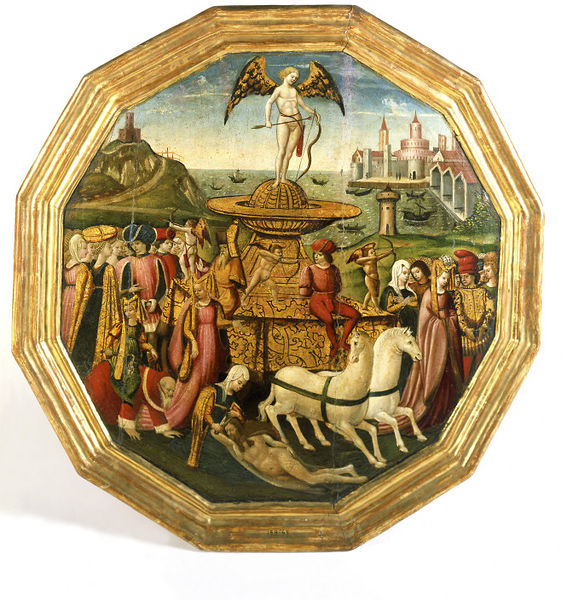