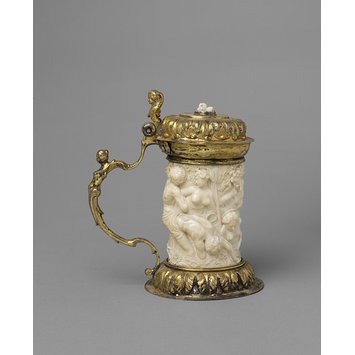 Lidded tankards had been a popular form of drinking vessel across Northern Europe from the mid-sixteenth-century. Augsburg goldsmiths produced numerous examples with striking and fantastic ornament. The mounts on this tankard were made by Augsburg goldsmith Hans Heinrich Hering, but the carved ivory drum is the work of another artist, possibly Ulrich Herdtler, a Swiss pupil of David Heschler (1611-1667). The subject-matter of the decoration is inspired by the antique, and comprises a frieze of tritons (sea gods) and nereids (sea nymphs) amongst reeds and water.

Assay mark on the underside of the lid rim.

Maker's mark 'HH' monogram for Hans Heinrich Hering, and Augsburg town mark, on the base and on the outer rim of the lid.

The mounts for the tankard are the work of Augsburg goldsmith Hans Heinrich Hering, who became a master goldsmith in 1662. Few of his works survive: Seling (1980, no. 1640 and 1994, p. 42) lists only a chalice and a cup in the form of a fish (made with the goldsmith Johann I Seutter) with his mark.

Nothing is known of the early ownership of the tankard. In the nineteenth century it entered the collection of John Jones, who bequeathed it to the Museum on his death in 1882. 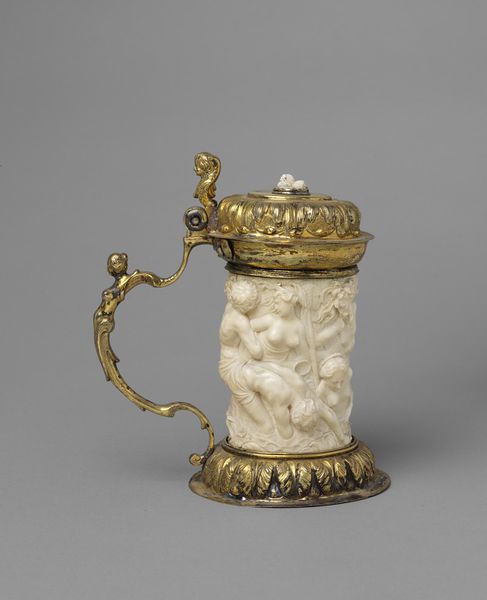