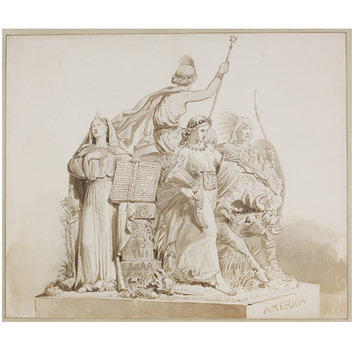 Drawing showing a group of figures personifying America by John Bell, 1864, for his sculpture for the base of the Albert Memorial designed by Sir George Gilbert Scott (1811-1878) to commemorate Prince Albert. The idea of the commission for the sculpture was to have four groups representing the Continents. Each group was to have four figures, illustrating aspects of relevant countries or peoples, arranged around a representative animal on which is seated a fifth figure, female in every case, which was intended to personify the spirit of the continent. There are sculptural groups representing Africa, Asia, America, and Europe at each corner of the base of the Albert Memorial.

This is one of three drawings of the first ones by Bell for the Continent of America in the V&A. The female figure personifying America is sitting on a bison in front of which walks the figure personifying Canada carrying a cornucopia. On the right is a Native American personifying the United States. On the left is a female figure personifying Mexico who is holding up a bible open at Isaiah, Chapter 44, verses 18-22. In its original historical context, the use of this biblical reference may have alluded to the spreading of Christianity amongst those of other beliefs. She rests the bible on an Aztec altar inscribed with hieroglyphics at the base of which are fallen trophies of skulls attached to a spear.

Pencil, pen and ink and wash on paper

'These are the true sayings of God'
On a strip laying vertically down the bible opened at Isaiah chapter XLIV verses 18 - 22.

This design is for the sculptural group personifying the continent of America made in marble for one of the four continents for the base of the Albert Memorial in Hyde Park.

Benedict Read states in his chapter 'The Sculpture' In: Chris Brooks, ed. The Albert Memorial. The Prince Consort National Memorial: its History, Contexts, and Conservation. p. 242 that 'each of the Continents comprises four figures, illustrating aspects of relevant countries or peoples, composed around a representative animal on which is seated a fifth figure - in each case female - intended to typify the spirit of the continent'.

Richard Barnes's great, great grandmother was John Bell's sister, Jane Bell. Richard Barnes used his copyright under a reproduction of E.545-2008 in his book, John Bell, The Sculptor's Life and Works so it is possible that the drawings were in his family's possession before they were sold at Sotheby's.

Drawing showing a group of figures personifying America by John Bell, 1864, for the north side of his sculpture for the base of the Albert Memorial.

This design is one of the first for the sculptural group of America and was probably made shortly after John Bell accepted the commission in his letter dated '19 May 1864'. RA/VIC/ADDH/2/4/822. Bell's design that he described not long afterwards indicated that the figure personifying the United States '[as one] as was the case in 1861' was female. The figure appears to have remained female from then onwards until the final execution of the sculpture in marble.

1861 was the date of the outbreak of the American Civil War (1861-1865) when eleven Southern slave states declared their secession from the United States.

That this design (one of 3) was one of Bell's first is supported by Richard Barnes's comments about them in John Bell. The Sculptor's Life and Works, p. 67. See References tab. He stated that 'in brown wash over pencil lines he prepared his first drawings.' 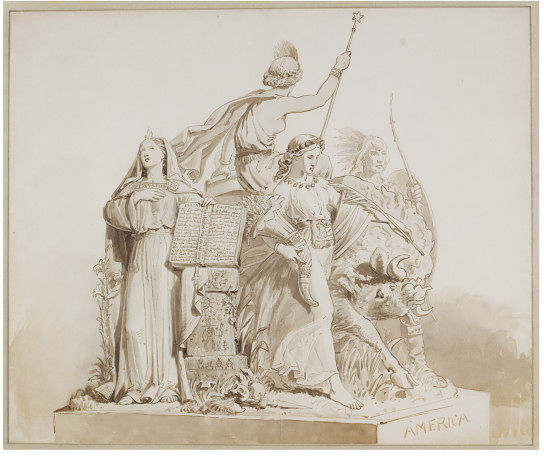