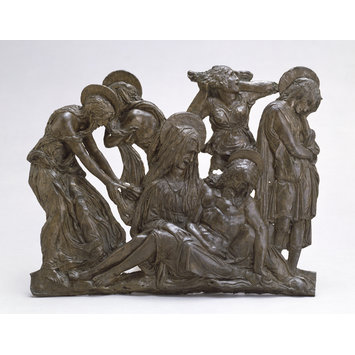 Lamentation over the Dead Christ

This unusual bronze shows the dead Christ, supported by his mother Mary and encircled by other mourners including St John the Evangelist and Mary Magdalene. It was probably made by Donatello, but we do not know when or for whom. It has been variously dated to Donatello's Florentine period just before he left for Padua in 1453 and to after his return. It has also been suggested that it may be a trial piece for a commission to decorate the doors of Siena cathedral, on which Donatello was working in 1457-9, and has been associated with the bronze relief of approximately this size mentioned in the cathedral records in 1639. The gaps between the figures appear to have been a deliberate feature of the design and may have been intended to allow a background of coloured stone to show through. The surface has been taken to various levels of treatment, enhancing the raw emotion evident in the scene. This perhaps suggests that it was intended as a finished work for private devotion.

In this Lamentation, the Virgin supports the body of Christ on her knees. The three other mourning figures may be Mary Magdalene (on the left), and St John the Evangelist (on the right). Behind the central group are two mourning women facing outwards, one on the right tearing her hair, and the other on the left with her head buried in her hands. The surface of the bronze is unevenly worked; the background between the figures has been cut away (or left open), and there are some casting flaws.

The original purpose of this relief is not known, and various theories have been advanced about its place and date of manufacture. It is widely accepted to be by Donatello.

It has been suggested that it was perhaps a test piece for the doors of Siena cathedral, an unfinished project on which Donatello was working in 1457-9. The cathedral inventory of 1639 lists a bronze demonstration panel of approximately this size. Pope-Hennessy rejected this theory on stylistic grounds, suggesting that the relief is more likely to have been made immediately before Donatello's departure from Florence to Padua, where he was based from 1443-53. He proposed that the drapery, figure types and relief style are similar to those of the bronze doors of the Old Sacristy of San Lorenzo, Florence, completed before 1443. In contrast, Anthony Radcliffe remarked on the similarity of the drapery forms to those shown on the Chellini roundel (A.1-1976), which he suggested might support a later date for the present relief, to the period after Donatello's return from Padua. However, as Donatello was an exceptionally innovative and inventive sculptor, whose work does not necessarily follow any neat stylistic progression, it can be difficult to date securely his undocumented works.

Pope-Hennessy asserted that "the removal of the background was presumably occasioned by casting flaws", but flaws remain in other areas, and the missing sections relate closely to the outline of the figures, suggesting that they were part of the design. This is further supported by the fact that the edge follows the contours of the figures along the top of the relief. This treatment clarifies the relationship between the figures. Nicholas Penny has suggested that the gaps may have been intended to allow a background of coloured cloth or stone to show through. Sarah McHam suggested that this material would be red, symbolic of the Blood of the Redemmer, intended to spur an emotional response to the image of the dead Christ. She interpreted the piece as a finished work, in Donatello's 'non-finito' (literally 'unfinished') manner, possibly designed for personal devotion.

Some areas of the bronze are worked up to a smoother finish, notably the flesh, while others have apparently been roughly tooled, and some areas seem to capture the textures created in the wax as cast, with little or no afterwork. The dramatic and vibrant treatment of the surface reflects the raw emotion expressed by the figures.

This dramatic relief shows the dead Christ supported by his mother Mary
and encircled by other mourners, including St John the Evangelist and Mary Magdalene. It was not fully worked after casting, perhaps because it was a trial piece for a commission, but its
rough appearance seems appropriate to the raw emotion evident in the figures. 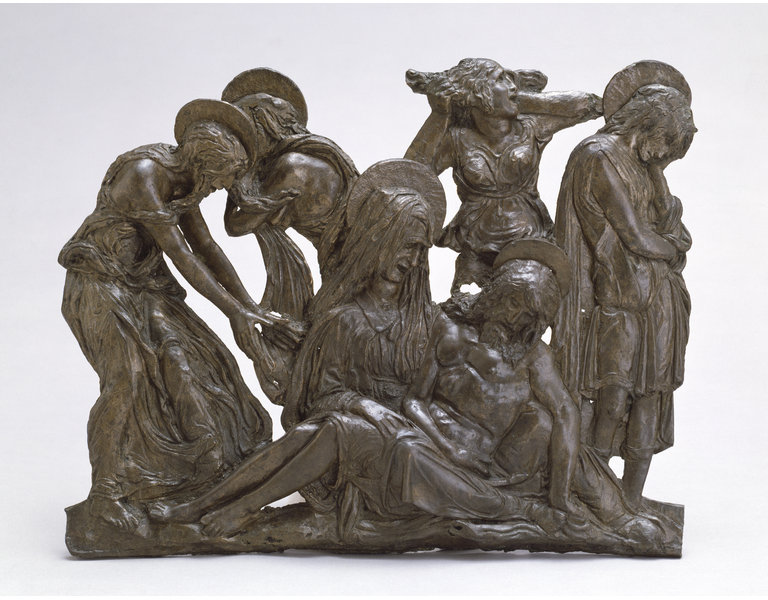