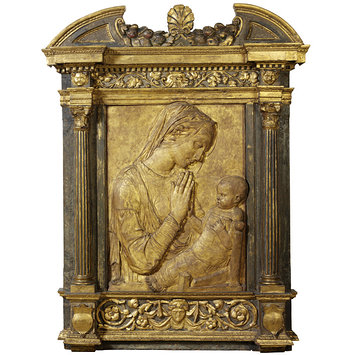 In the course of his long career, Donatello carved and modelled several Madonna reliefs and designed a great number of other compositions which were reproduced in an extensive series of casts.

This large terracotta relief is very likely to be Donatello's original model for a series of casts. The relatively formal relation of the praying Virgin to the Child, the serious expression on her face and the tightly wound headdress place this design in the years after Donatello's return from Padua, around the time of the Chellini Madonna (1456).

Some details of this particular relief also feature in other Madonna designs of the same period, showing how Donatello, once interested in this particular kind of composition, explored it in several variations.

Dontello (b. ca. 1386 - 1466) was an early Renaissance sculptor and artist from Florence, who became well known for his bas-relief works, which already incorporated perspective illusionism. He was the most imaginative and versatile of the early Renaissance artists, famous for his rendering of human character and for his dramatic narratives.

The Virgin is seen in half-length facing to the right, with her hands clasped in prayer. The Child, wrapped in swaddling bands, is shown lying on a seat or cradle whose two supports protrude forward from the relief plane. He places his right hand between his mother's hands.

The relief was cleaned in 1949, the rubbed parts of the outer surface have been replaced by bronze paint.
Bought in 1867.

Historical significance: The attribution and date of this relief have been the subject of much debate. Most scholars now consider it an autograph work by Donatello, possibly executed around 1455-60 (Avery 2001, dates it to about 1430-40). The relatively formal relation of the praying Virgin to the Child, the serious mood of her face and the tightly wound headdress place this design in the years after Donatello's return from Padua and in vicinity to the Chellini Madonna (1456, museum no. A.1-1976).
This design survives in at least six original Quattrocento casts as well as the present terracotta relief, regarded as Donatello's original model for the series of casts. Among them are the casts in the Skulpturensammlung, Staatliche Museen, Berlin, in the Musée Jacquemart-André, Paris and formerly in the Neuerburg collection, Cologne. These stucco casts show some subtle compositional differences to the terracotta relief, for instance in the neckline of the Virgin's dress, the line of the headdress above her forehead, the size of her head, the perspective of the chair, the angle of the child's head and the shape of his belly underneath the swaddling bands. A pigmented version of this composition was adapted as part of a Holy Family, of which coarse versions in stucco exist in the Museo Bardini in Florence and in Berlin. In these reliefs the head and hands of St. Joseph are introduced in the lower left corner, and the heads of the ox and ass appear above the Child Christ.

Reliefs of the Virgin and Child were intended for worship in domestic surroundings, particularly in the bedrooms of married couples, and family chapels, as well as for setting in street-tabernacles on the façades of private houses. Madonna reliefs were also to be found in more public areas of a house, reception halls and even offices. The increasing demand for Madonna reliefs in the Quattrocento was met by a lively production in various materials and price categories. Modelling materials, such as terracotta, stucco and papier-mâché, held particular advantages for the multiple reproduction of Madonna reliefs. By polychroming and gilding the surface and otherwise mass-produced artefact might be endowed with some artistic uniqueness. The export of Madonnas played a significant role in propagating the influence of the Florentine Renaissance style, in particular Donatello's design, on sculpture in other regions of Italy. In the course of his long career, Donatello carved and modelled several Madonna reliefs which are among the most beautiful and powerful images of Western art, and he also designed a great number of other compositions which were reproduced in extensive series of casts.

Stylistic and compositional changes throughout the development of Donatello's representations of the Virgin and Child from the late 1410s to the 1460s reflect an evolution of his handling of the various media as well as changes in his interpretation of the subject (for example the arrangement of the Virgin's headdress, the expression of her facial features, the relation to and the dress of the Child). Related designs tend to cluster at specific periods in time, suggesting that once Donatello became interested in a particular kind of composition, he explored it in several variations before developing the next idea. Pupils and followers contributed to the variety of designs by combining and copying elements from related compositions to form closely connected derivatives. 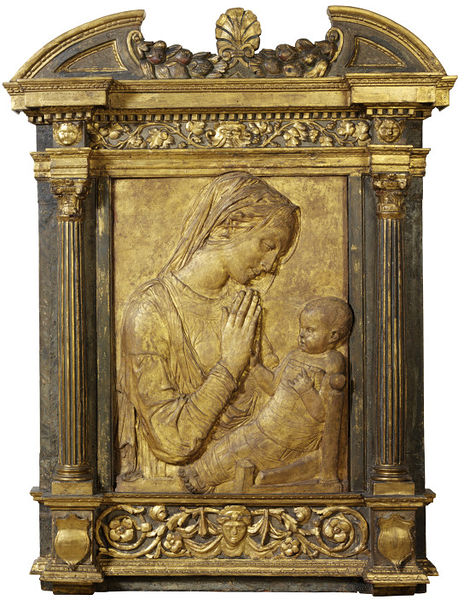