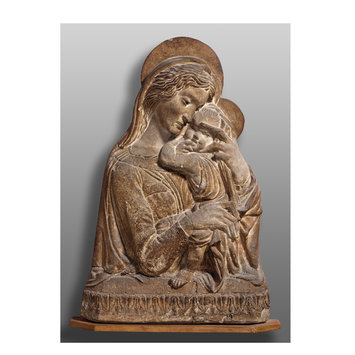 The composition of this stucco relief was popular in the fifteenth century. It is known as the Verona Madonna, after a version in stucco (formerly pigmented) on the outside of a house at the corner of the Vicolo delle Fogge in Verona. The surviving casts depend from a model by Donatello that is likely to have been produced during his stay at Padua, probably between 1447 and 1453. The weathered condition of this relief suggests that it was also a street Madonna. The model was probably designed specifically for reproduction, and examples survive in terracotta and other materials, as well as stucco as seen here. Some have been naturalistically painted.

The Virgin and Child, relief in stucco (cast). The Virgin is shown in half-length facing to the right. She wraps the Child's head in her cloak with her left hand, and rests her right hand on his thigh. His head is against her cheek. The surface of the relief is substantially abraded.

Verona (probably made in Verona)

This relief is known as the Verona Madonna after a version that remains in situ, fixed high on the external wall of a house on the Vicolo delle Fogge in Verona. It is thought to have been designed by Donatello during his stay in Padua, probably between 1447 and 1453, and was perhaps intended specifically for reproduction. It was a very popular design in the fifteenth century and numerous copies of this relief survive (with slight variations) in terracotta, stucco, and wood.

The V&A relief is identical to the one in Verona, and has a weathered surface, suggesting that it too was originally a street madonna. They are both made from stucco which was a durable but relatively cheap material; the casts could be made in large numbers and were often painted.

'Street madonnas' like this were devotional objects but were also thought to offer protection to the neighbourhoods over which they looked. Many remain in Italian cities, and new ones continue to be put up today.

The Virgin and Child, relief in stucco after Donatello, Italy, probably Verona, about 1450-75

This popular composition is known as the Verona Madonna after a stucco version
placed high on a street corner in Verona. Street Madonnas like this were thought to protect the neighbourhoods over which they watched. The Christ Child is like any other baby, nestling into his mother’s
breast and sucking his fingers.

This popular composition is known as the Verona Madonna after a stucco version placed high on a house on the corner of the Via delle Fogge in Verona. It appears to have been designed specifically for reproduction, and variants also exist in terracotta and papier mâché. 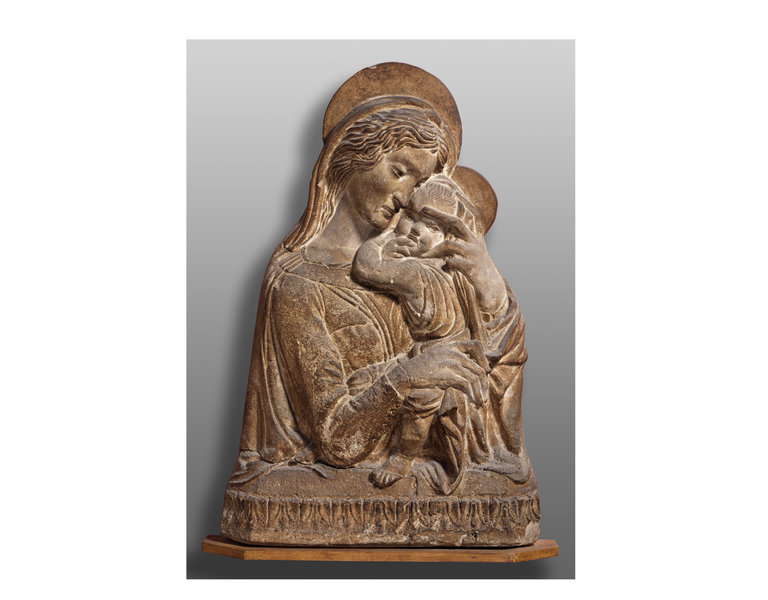