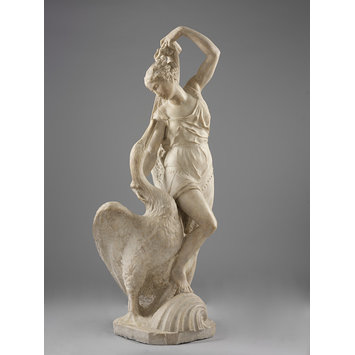 Leda and the Swan

This group was bought in Florence in 1865 by the British painter Sir John Everett Millais. It was originally said to be by Michelangelo, however since it's arrival in Britain, and it's acquisition by the V&A in 1937, the attribution has been discussed at length without definite conclusion. In mythology, Leda was taken by the swan, who was Zeus in disguise, and is said to have given birth to Helen as a result. The left leg of Leda and the wings of the swan have been left unfinished.

Leda wears a long robe with a belt and fringe over her thighs. Her left arm is raised, and she is gazing downwards over her right shoulder at the swan, which touches her arm with its beak. Her right foot is rainsed and rests on a shell, and her right hand rests on the neck of the swan. Her left arm is raised above her head, and in her left hand she holds a piece of drapery. The figures stand on a shallow octagonal base. The left leg of Leda and the wings of the swan are unfinished.

The painter Sir John Everett Millais bought this while in Florence as a sculpture by Michelangelo, from the collection of Count Angelo Galli-Tassi (1792-1863). He was told at that time that it had been in the Galli family for over three hundred years.

When it came to the V&A the piece was associated with Vincenzo Danti (1530-76) through comparison with the figures on his sportello of 1559. This attribution was firmly expounded by Keutner in the Burlington Magazine in 1958, who dated the piece to 1572-3. Keutner proposed a stylistic relationship with the bronze Venus (Florence, Palazzo Vecchio) also attributed to Danti, and the Salome of 1570 from the monumental bronze The Beheading of St John the Baptist (Florence, Baptistery). Pope-Hennessy (1964a, vol. 2, pp. 457-58, no. 484) followed this attribution, and suggested that Danti had left the marble unfinished when he departed from Florence in 1573.

Kinney (1976, pp.25-33), however, identified the marble as "una Leda alta due braccia" by the Florentine sculptor Bartolomeo Ammanati, recorded by Raffaelo Borghini (Il Riposo) as being in the possession of the Duke of Urbino and datable to about 1535. A drawing in the Museum of Fine Arts, Boston, was said by Kinney to be a preliminary sketch. Kinney rejected the inscribed attribution to Giuliano Dandi, sculptor of San Gimignano, said to have originated from Vasari, the one-time owner. This suggestion has since been rejected, and the nature of the sketch indicates it is a study after the marble, or possibly after a small-scale model – a potential explanation for the differences between the drawing and the sculpture.

Although theoretically this does not rule out association with Ammanati's documented Leda, generally identified with a Michelangelesque example in the Bargello, the style of the V&A group is quite distinct from the sculptor's secure works. Similarly, despite certain affinities, Danti's marbles are not sufficiently close to the overall treatment of the Leda to warrant firm attribution to him. Comparisons have been made with other sculptors, including Benvenuto Cellini, who in 1559 carved a (lost) marble Leda "one braccia tall". The marble can therefore be placed in the general orbit of Michelangelo's followers in the third quarter of the sixteenth century.

Louis Waldman, in the Burlington Magazine in 2002, attributes the group to the Florentine sculptor Battista Lorenzi. He compares the following aspects of the group to the female figure in Lorenzi’s Alpheus and Arethusa (c. 1568-70, Metropolitan Museum, NY): Leda’s heavy trunk, her serpentine pose, round idealised face with almond eyes and carefully incised pupils, her deeply drilled hair. Waldman also compares it to the more Michelangelesque figure of Painting by Lorenzi on Michelangelo’s tomb in S. Croce (c.1565-8).

Historical significance: The Leda and the Swan is a powerful yet subtle work, with its lyrical movement and sensitive interrelationship of the protagonists. Like Cellini's Ganymede, Leda fondles the delicately carved feathers of the bird's neck but, in contrast to Cellini's work, some areas of the marble are confused and poorly carved, possibly indicating a later reworking. Unusually, the Leda is shown draped, her diaphanous, scalloped robe belted at the waist and supported at the shoulders by straps and clips from rodent (possibly weasel) heads, which perhaps held some significance. This differs markedly from the typical classical drapery on similar contemporary sculpted females.

There are many conflicting myths surrounding Leda: the basis of the myth is that she was the daughter of Thestius the king of Aetolia and Zeus went to her in the shape of a swan and she subsequently gave birth to Helen. Other representations of this group more often show her naked, and the poses can be more explicit than this more companionable group.

Pope-Hennessy suggested that the marble may have been intended as a fountain figure, however this is not supported by evidence, and so the original setting remains unknown.

Statue, Leda and the Swan, marble by Bartolomeo Ammanati, Italy (Florence), about 1535 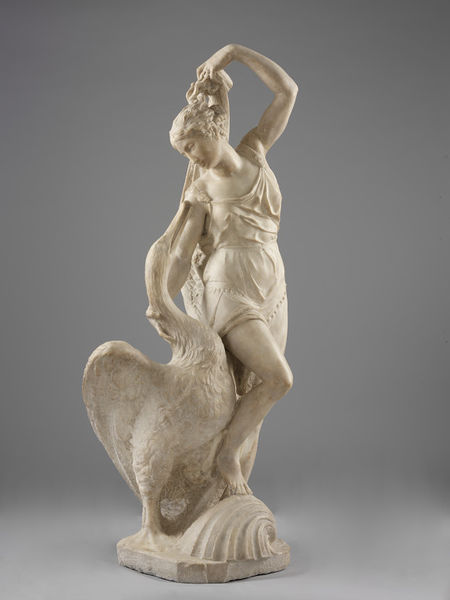