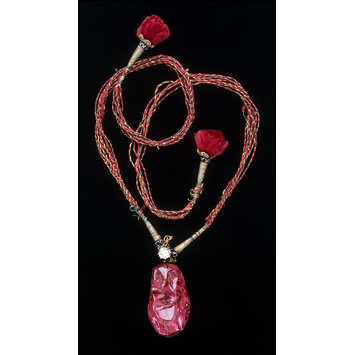 This gemstone is a spinel, a stone gemmologically similar to a ruby. It is inscribed with the names or titles of the Mughal emperors Jahangir (r.1605–1627), Shah Jahan (r.1628–1658) and Alamgir (r.1658–1707), the former Mughal prince Aurangzeb. It was bequeathed to the V&A in 1922 by Julia Mary, Lady Carew. Information supplied by her family stated that it had been bought by a relative in Tehran before 1870.

The Carew spinel engraved with the titles of Jahangir (r.1605-27), Shah Jahan (dated 1629-30) and 'Alamgir (Aurangzeb) (dated 1666), drilled from both ends across its longest dimension. The gold pin is secured by a diamond at top and bottom.

These are the titles of Jahangir, Shah Jahan (2) and 'Aurangzeb respectively.

The stone was said to have been bought in Tehran by a relative of the Rt. Hon. Julia Mary, Lady Carew, some time before 1870. [It was apparently first acquired by Monsieur Richard, from whom it was purchased by Mr Charles Alison, Lady Carew's great-uncle, who was British Minister at the Court of the Shah.]

The inscriptions were added by a specialist engraver within the imperial court workshops. 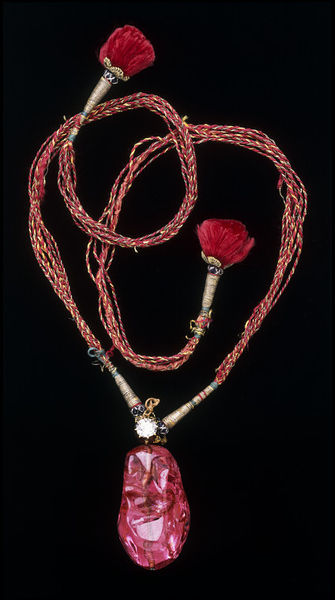