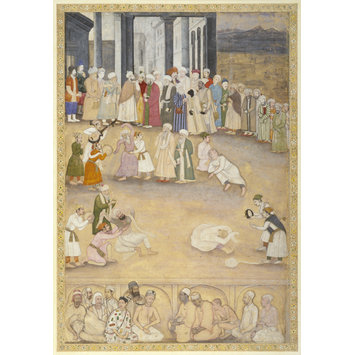 Panting, in opaque watercolour and gold on paper, allegorical outdoor scene of a gathering of holy men, probably near the shrine of Mu'in al-Din Chishti in Ajmer. An assembly of dervishes watch the celebration of the Zikr, or whirling dance, on the plinth of a building. In the foreground sit twelve Hindu religious reformers and teachers of the 15th to 17th centuries, and in the distance on a plain receding to a group of hills are various sideshows and refreshment booths such as are found during the celebration of the Urs of a saint. Of the two principal figures standing before the building (towards whom those on each side are facing), the white robed figure with a staff and rosary is identified by an inscription as 'Khwaja Qutb al-din' the friend and pupil of Muin al-din Chishti. The figure facing him can be identified on the basis of inscribed imaginary portraits as Muin al-din himself. The Hills in the distance are recognisably those of Ajmer. The saints in the foreground are identified by inscriptions from left to right, which show them to be seated in approximately chronological order as follows: Rai Das (fl. 1470), Pipa (born 1425), Namdev (probably), Sain, Kamal, Aughur, Kabir, Pir Muchhandar, Gorakh, Jadrup, Lal Swami, ...Swami.

Painting, Khwaja Sahib and a gathering of mystics and musicians, opaque watercolour and gold on paper, Mughal, ca. 1650-1655 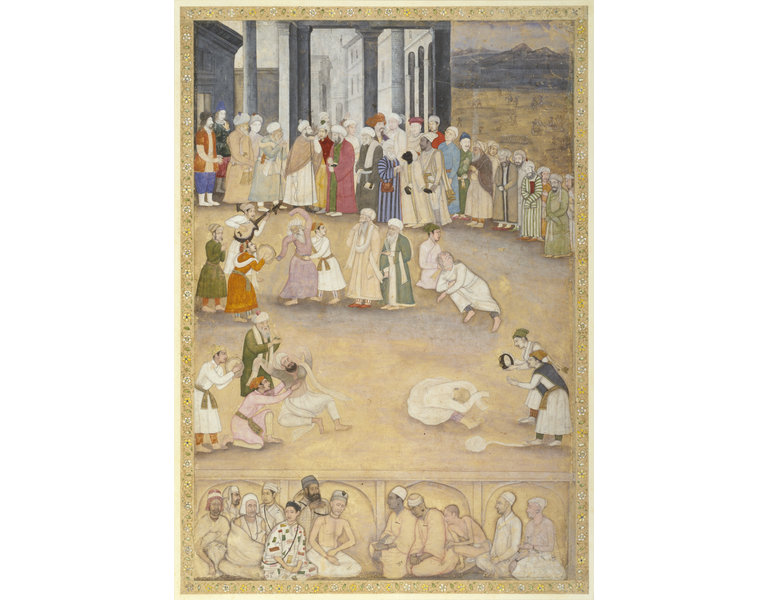