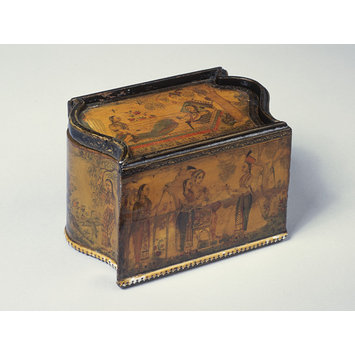 This casket has delicate painted decoration of a fête galante. This is a romantic scene in which courtiers are shown in an idyllic rural setting, in this case a forest. Here we see willowy figures enjoying the pleasures of music, dance, drink and daydreaming surrounded by singing birds and fragrant flowers. The very shape of the casket reflects this carefree atmosphere. The ends are an unusual serpentine shape rather than straight. The painting on the box is in a style practised in Golconda in 1675-1700. It is unsigned but it is very close in style and feeling to a miniature painting in the Chester Beatty Library, Dublin. This carries the signature of Rahim Deccani and also shows an enthroned prince surrounded by attendants. The artist specifies his Deccani origin in his signed works. This suggests that he was working away from home, possibly elsewhere in India or in Iran. He might have fled there following the Mughal conquest of Golconda in 1687.
This box probably originally held precious belongings. Jules Richard, a Frenchman who arrived in Tehran in 1844, acquired it in Iran. Richard's collection of Iranian art was unparalleled. He formed it at a time when there were few Europeans in the country and little competition for the pieces that appeared on the market. In 1875 the South Kensington Museum (now the V&A) acquired 2,000 objects from the collection through Robert Murdoch Smith. He acted as the Museum's agent in Tehran from 1873 to 1885. Further pieces from Richard's collection, including this casket, appeared at the Exposition Universelle, Paris, in 1889. Murdoch Smith acquired them for the Museum in the same year.

Papier-mâché casket with sliding cover, painted with a dancer in a garden, a prince seated on a chair surrounded by women, a European man fluting, a girl reaching into a tree and, on the top, a princess reclining on a bed in a garden with companions. Varnished and with a pierced ivory base moulding.

Golconda (made)
Iran (possibly, made)

Papier-mâché, painted and varnished, with pierced ivory base moulding

"This casket, probably originally used to hold precious belongings, is delicately painted with fête galante in which courtiers are portrayed in a forest idyll...
The painting on the box belongs to a style practised in Golconda in the last quarter of the seventeenth century. Although not signed, it is very close in style to a miniature painting in the Chester Beatty Library that bears the signature of Rahim Deccani and similarly depicts an enthroned prince surrounded by attendants. The fact that in his signed works the artist specifies his Deccani origin suggests strongly that he was working away from home, possibly elsewhere in India or in Iran, where he might have fled following the Mughal subjugation of Golconda in 1687. Three pen-boxes (qalamdans) exist bearing his signature, one in the Khalili Collection, a second in the Freer Gallery of Art, and a third that was on the Paris market in 1975.

The European figure painted on the casket probably derives from Western representations of Orpheus, the legendary Thracian poet who charmed beasts with music played on his lyre. With the exception of the pleated sleeves, which belong to the early seventeenth century, his dress corresponds to European fashions of the 1670s and 1680s. However, the Mughal-style flowers that decorate the lining of his coat and the patterned breeches suggest that these Western-style garments were made in India from textiles that were available locally. Indian tailors were renowned for their skill at copying Western fashions."

From the Richard Collection. Bought by the Art Museum for £5 in 1889.

Casket, papier-mâché, painted and lacquered with ivory edging at the base, Golconda, Deccan, probably painted by Rahim Deccani, ca. 1660.

CASKET
Pâpier-maché, painted and lacquered with ivory edging at the base
Deccan (Golconda?)
Probably painted by Rahim Deccani
c. 1660-70
851-1889
One of the figures wears European dress datable to about 1660. The casket is attributed to the artist Rahim Deccani on the basis of a signed painting in a closely comparable style
in the collection of the Chester Beatty Library, Dublin.
[27/9/2013] 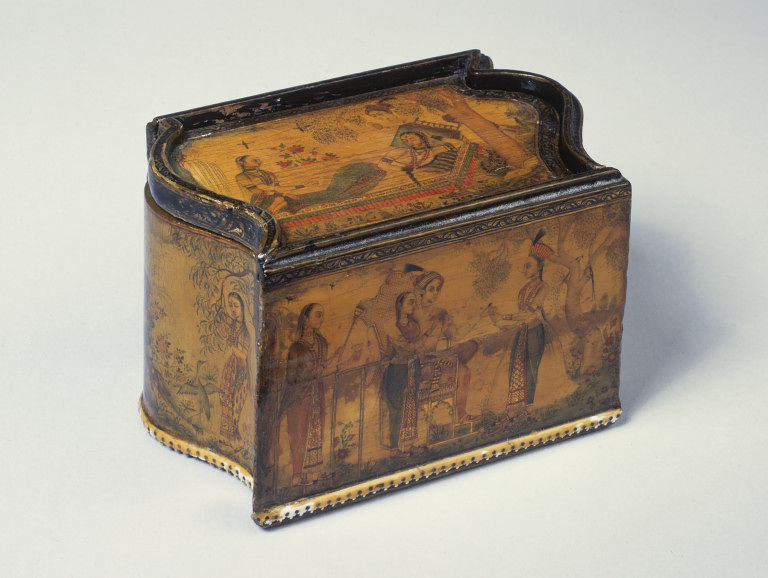