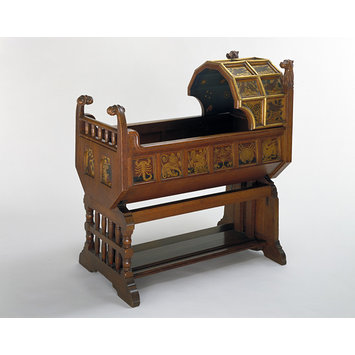 The architect Richard Norman Shaw designed this cradle for the first son of a fellow architect, Alfred Waterhouse, in 1861. Both men were prominent architects of the Gothic Revival. The design of this cradle is in quite a severe and heavy Gothic style. The stand and cradle both show the principle of 'revealed construction' that was so important to architects and designers of the Gothic Revival. They considered it of major importance to the moral integrity of their work.

The cradle is in oak, an honest, British wood, in contrast to mahogany or satinwood, which were considered to be showy, modern imports. Such architects admired painted and gilded decoration because there was good historical evidence that both those techniques had been used on medieval furniture. The sides are painted and gilded with the signs of the zodiac, and panels possibly representing the four seasons are on the front and back. Blackbirds, flowers and leaves are painted on the hood, the inside of which is painted blue with gold stars. The hood cover also incorporates three bronze farthings, one bearing the date 1861, the year that Paul Waterhouse was born. This may relate to the custom of giving coins to a newborn baby as a good luck token. The hood is hinged and was designed to tip back to allow access to the baby. Two leather straps prevented the hood from tipping too far back.

The original design for the cradle is in the Print Room of the V&A (E.75-1961). It shows curtains hanging at the sides below the cradle and between the supports.

In 1860 the successful architect Alfred Waterhouse (1830-1905) married Elizabeth Hodgkin (1834–1918). The newlyweds initially lived in Manchester, where Alfred’s architectural practice was then based, and the first of their five children, Paul, was born in October 1861. This cradle was designed for the Waterhouses by another well-known young architect, Richard Norman Shaw (1831-1912).

At this time a number of architects and artists were becoming engaged in the design and decoration of furniture, stimulated by the activities of William Morris and William Burges. The use of oak, a native English wood, straight rather than curved lines, and painted decoration inspired by Medieval furniture, are typical of architect-designed furniture in this period. A pen-and-ink design for the cradle by Richard Norman Shaw is also in the collection of the V&A (E.75-1961).

The sides are painted and gilded with the signs of the zodiac along the sides, panels possibly representing the four seasons on the front and back, with blackbirds, flowers and leaves on the hood, the inside of which is painted blue with gold stars. The hood cover incorporates three bronze farthings, one bearing the date 1861, the year that Paul was born. This may relate to the custom of giving coins to a newborn baby as a good luck token. The hood is hinged and was designed to tip back to allow access to the baby. Two leather straps prevented the hood from tipping too far back.

The zodiac signs may hold a clue to the date of the birth of the Waterhouses' first child. They are arranged according to the months of the year (rather than the zodiac calendar which traditionally starts with Aries, from 21 March). Looking at the side of the cradle with the canopy to the left, the first panel corresponds to January, (Capricorn; 22 December to 19 January), followed by Aquarius, Pisces, Aries, Taurus and Gemini. On the other side, from left to right, the panels would be expected to continue with Cancer followed by Leo, Virgo, Libra, Scorpio and Sagittarius. However, Scorpio and Cancer have been transposed, making Scorpio the first symbol on this side, rather than the fifth. This may be a reference to the fact that Paul was born on 29 October, and therefore his zodiac sign was Scorpio.

Carved oak with gilt and painted decoration and leather straps.
Designed by Richard Norman Shaw (1831-1912) for one of the sons of Alfred Waterhouse. [pre July 2001]
Designed for the son of Alfred Waterhouse, the architect, some of whose furniture is also on display nearby. The original design, which was modified in execution, is in the Prints, Drawings, and Paintings Collection. [1993]
Cradle
1861
Richard Norman Shaw (1831–1912)

Norman Shaw was one of the many Gothic Revival architects who turned their hand to furniture design. Rejecting the mass production of commercial furniture, they favoured robust construction and painted decoration.

The cradle was made for the baby son of another architect, Alfred Waterhouse. The sides are painted with the signs of the zodiac and the hood includes three bronze farthings. [01/12/2012]

A design for the cradle, in the collection of the Victoria and Albert Museum (E.75-1961) differs from the final result in many ways. The most noticeable difference is that the design shows nine small panels decorated with stylized flowering plants along the side, whereas there are only six panels along the side of the finished cradle, each decorated with a representation of the signs of the zodiac. Underneath the zodiac signs there are traces of an earlier decorative programme: tiny pin-prick indentations in the centre and the outlines of scored circles suggest that a compass was used to map out a scheme which was subsequently changed. It is possible that the zodiac signs were originally conceived as being framed in roundels. This suggests that the panels were decorated in situ. 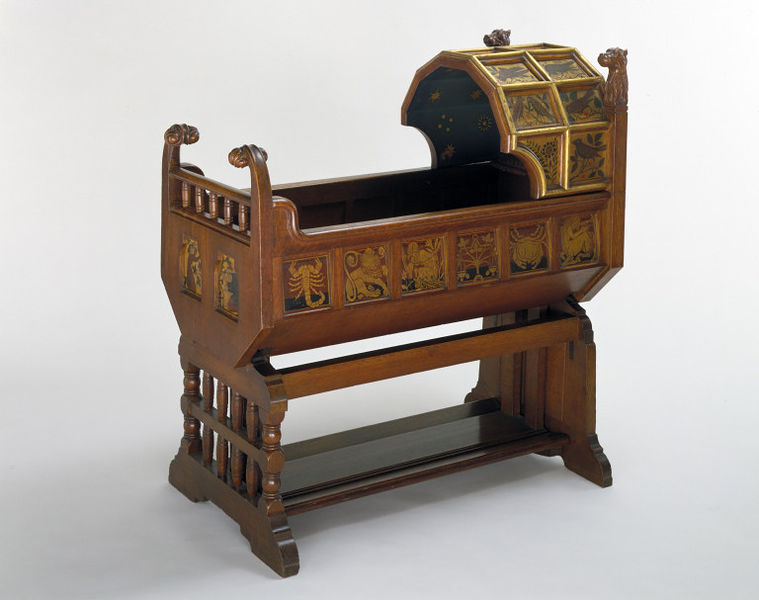