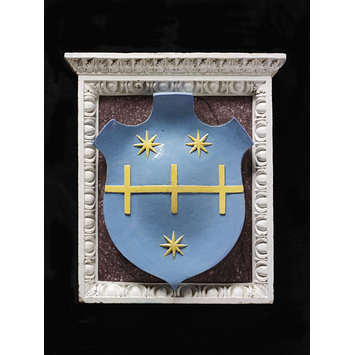 The Della Rena family were nobles from Prato, just outside Florence. The family occupied various administrative positions at the Medici court and this coat of arms (stemma) was displayed prominently above the door of their villa.

Stemme (pl) such as this were a visible sign of status and ownership. Designs could take many forms but normally consisted of a central shield which was decorated in line with a family or individual's heraldic tradition, in this case in azure (blue) with a barrulet between three stars. In general, coats of arms showed a person’s rank, dignity, title and jurisdiction but in this instance also highlights family and group identity.

Relief in polychrome enamelled terracotta. Within a rectangular white egg-and-dart frame capped by a leaf-and-dart cornice, on a porphyry ground, is a Tuscan shield bearing the arms of Della Rena (azure, a barrulet counter-embattled or, between three stars, two and one of the same).

the identification of the arms as those of the Della Rena is due to Marquand who ascribes the plaque to the atelier of Andrea della Robbia. Maglagan and Longhurst assign the relief to the Della Robbia workshop.

Historical significance: The Della Rena family were nobles from Prato, just outside Florence. The family occupied various administrative positions at the Medici court and this stemma (coat of arms) was displayed prominently above the door of their villa, as a visible sign of their status and ownership.

Stemme(pl.) designs could take many forms. Normally consisting of a central shield, (and a crest and motto if one existed), it showed a person’s rank, dignity, title and jurisdiction. It might also indicate family and group identity, or allegiance to a ruler or religious figure. Those wealthy or fortunate enough to have a coat of arms would display it in as many places as possible, and in every conceivable medium. It might be displayed on the inside or outside of buildings, on tombs and burial monuments, in church windows, or on smaller decorative objects.

The della Renna stemma was made by the della Robbia workshop ca.1520-40. the workshop was renowed for their work in tin-glazed terracotta which florished in Florence for nearly 150 years. Initially the della Robbia workshop decorated their ceramics in white and blue, but later added glazes of many colors, especially green, yellow and purple - some of which appear on this stemme. Glazed terracottas made by the workshop were individual pieces of art, built into walls to serve in architectural contexts.

At present, the most well documented member of the della Rena family was Orazio della Rena, a diplomat and secretary to the Medici. He was born in Prato, and after studying law at the University of Pisa, began a career at the Medici court gaining appointments as embassy secretary in Ferrara and in Spain. As secretary of the Medici embassy in Ferrara, Della Rena wrote an in depth report entitled "Relazione dello Stato di Ferrara" which was later published in 1896. Similarly, as the secretary of the Medici embassy in Spain, he wrote several reports of the state of the nation and handled delicated diplomatic tasks.

After he returned to Italy, Della Rena was sent to work at the Medici embassy in Rome for a period and was later given several important administrative appointments at the Medici court. Orazio della Rena is also known as a scholar and as the author of several essays including "Prosapia del Salvatore del genere umano", 1620. Other works have been attributed to Della Rena including a life of Grand Duke Ferdinando I entitled "Vita di Ferdinando di Toscana" and the "Serie breve de' vescovi". Late in life Orazio retired to the family villa at Galognano where he died. Della Rena was buried in the church of San Francesco al Monte. He and his wife Margherita Quaratesi had two sons Cosimo (born 8 January 1615) and Ferdinando (born 27 May 1616).

Panel-Relief, enamelled terracotta, Coat of Arms of the Della Rena Family, by the workshop of the Della Robbia, Italy, Florence, ca. 1520-40

Inventory of Art Objects Acquired in the Year 1858. In: Inventory of the Objects in the Art Division of the Museum at South Kensington, Arranged According to the Dates of their Acquisition. Vol I. London: Printed by George E. Eyre and William Spottiswoode for H.M.S.O., 1868, p. 8.
Maclagan, Eric and Longhurst, Margaret H. Catalogue of Italian Sculpture. Text. London: Victoria and Albert Museum, 1932, p. 84.
Pope-Hennessy, John. Catalogue of Italian Sculpture in the Victoria and Albert Museum. Volume I: Text. Eighth to Fifteenth Century. London: Her Majesty's Stationery Office, 1964, p. 251.
Marquand, Allan. Robbia Heraldry New Jersey: Princeton 1919, p.199, No.256 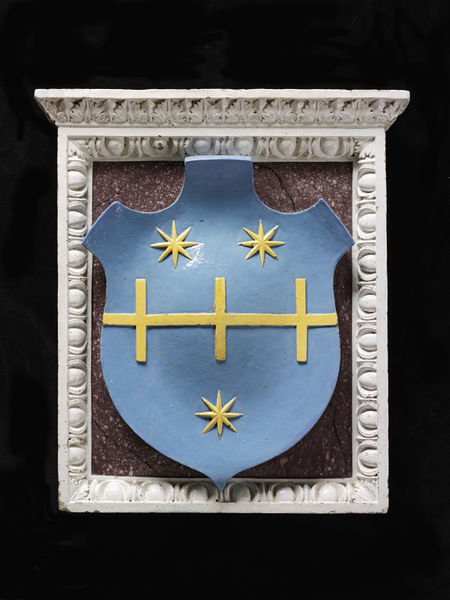