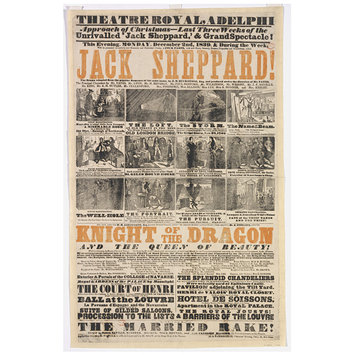 This woodcut and letterpress playbill advertises a night at the Adelphi Theatre in 1839. The theatre, which opened in 1806 as The Sans Pareil (without compare), was immediately successful, particularly when presenting burlettas and melodrama. When taken over in 1829, and renamed The Adelphi, melodramas continued, augmented by more spectacular productions such as Knight of the Dragon and Queen of Beauty.

Jack Sheppard! was based on the exploits of the notorious 18th century English robber, burglar and thief, who escaped imprisonment four times but was executed following his fifth arrest. Plays about him were produced within weeks of his death, but he only resurfaced to the public consciousness in 1839 when a novel about him by Harrison Ainsworth was published in instalments, and productions such as this returned to the stage.

Jack Sheppard! was on the bill with Knight of the Dragon & the Queen of Beauty, a performance featuring the participants of the Eglinton Tournament, a medieval-style tournament organised in 1839 by the 13th Earl of Eglinton. The expense and extent of the preparations became news across Scotland, and the railway line was even used in advance of its official opening to ferry guests to Eglinton. Participants in full period dress attempted to take part in events such as jousting, but torrential rain washed out the proceedings. Instead, the event was later adapted for this performance on the stage of the Adelphi Theatre.

Letterpress and woodcut playbill for the Theatre Royal, Adelphi, advertising Jack Sheppard! The titles of the two main performances are printed in red-orange, and engraving images from the productions are printed below the main title.

Woodcut and letterpress on paper

In the 19th century, circuses and menageries led the way in pictorial advertising. The acts and animals lent themselves to illustration, and dramatic pictures attracted the attention of people who could not read. The invention of a machine that could manufacture paper in continuous sheets reduced costs, enabling circuses to include woodcuts or wood-engraved images in their posters.

The Jack Sheppard bill shown here is an early example of this pictorial process being used to advertise drama. [77 words]
Poster for The Siege of Troy
1833
Astley’s Ampitheatre, London
Woodcut and letterpress
Museum no. S. 2-1983

Poster for Blondin on the High Rope
1862
Crystal Palace, London
Woodcut and letterpress
Museum no. S.71-1981 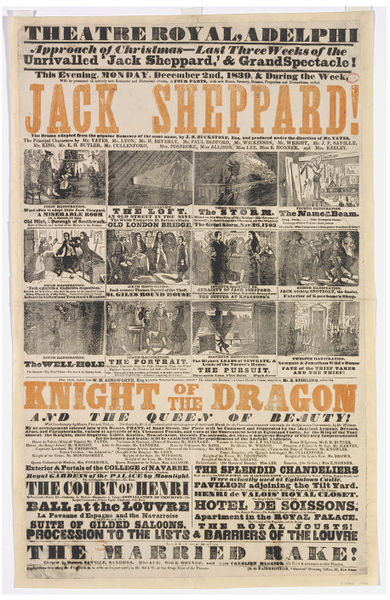