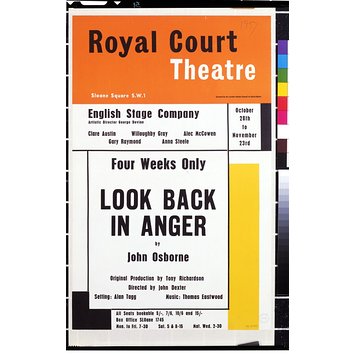 Look Back In Anger

The design of this poster, which calls to mind Mondrian's grid-based paintings, was the house style of the Royal Court from the mid 1950s. George Devine imposed this house style after starting the English Stage Company in 1956, when he became artistic director of the theatre. Devine's plan was to create a writers' theatre, with a view to discovering new writers and producing serious contemporary works. Look Back in Anger, which he produced in 1956, is often seen as the starting point of modern British drama.

Written by John Osborne, Look Back in Anger is the story of a love triangle involving an intelligent but disaffected young man (Jimmy Porter), his upper-middle-class, impassive wife (Alison), and her snooty best friend (Helena Charles). Cliff, an amiable Welsh lodger, attempts to keep the peace.

The play was a success on the London stage, and spawned the term "angry young men" to describe Osborne and other writers of his generation who employed harshness and realism, in contrast to the majority of West End writing, seen as more escapist fare. It transferred to Broadway the following year, receiving three Tony award nominations.

Typographic poster, with name of the theatre written in black and white over an orange background in the top quarter. The rest of the poster is on a white background, separated into different sized rectangles by black lines. The centre of the poster features the title 'LOOK BACK IN ANGER' in black text, and further information about the company and production is above and below this.

Offset and letterpress on paper

Poster advertising Look Back In Anger at the Royal Court Theatre, 28th October 1957.

Typographic posters
These posters use type, design and colour to suggest the style and content of the shows they are promoting.

The Royal Court was known for its challenging productions. In 1957–8 it used this distinctive format for all its posters and programme covers.

The vivid design of the Move poster conveys modernity and movement, while the Jerry Springer poster suggests the controversial nature of the show and the hellish situation Jerry finds himself in.
[75 words] 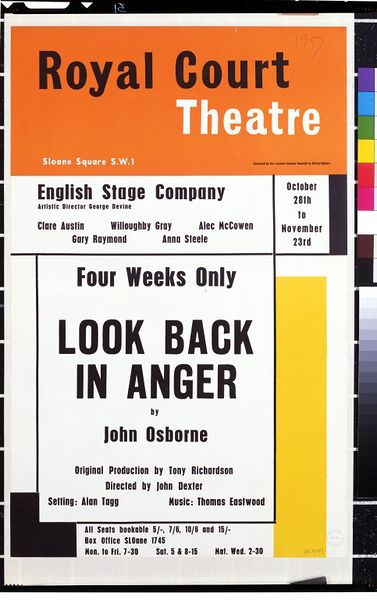