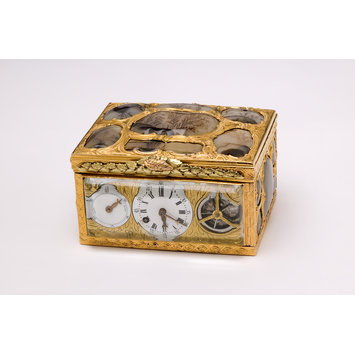 James Cox ran a company that made objets de vertu, also known as toys. His tradecard states that he made 'a great variety of curious work in gold, silver, and other metals also in amber, pearl, tortoiseshell and curious stones'.

In 1772 Cox opened a showroom, which he called a museum, where he displayed his most spectacular work. Cox’s objects are international in nature. He employed craftsmen of many different nationalities and bought parts from across Europe. He also sold his objects as far afield as India and Russia.

His objects were intended to surprise and inspire wonder in their viewer. To help create this effect Cox often included parts which made the objects move. These animated objects were not intended to be practical. For this snuffbox the inclusion of a dial adds an additional function: when out and about it doubles as a watch. However in reality it is far too heavy to be carried in a pocket. Cox’s creations are decorative through their beauty, scientific through their mechanisms and wondrous through the combination of the two.

Rectangular, gold-mounted, hardstone automaton snuffbox and watch, the cover, three walls and base set with panels of moss agate mounted in gold chased with scrolls. The front is a bevelled glass panel with a white enamel watch dial, the chapter ring enamelled in black with Roman hours and Arabic minutes, flanked by the regulator and open balance. The back panel opens to reveal a landscape painted in oils with two apertures through which are visible, when rotated by the clockwork mechanism, a man on a donkey, a lady in an interior, a bird in a tree and a hen. The upper rim of the box is chased with foliage, the lower rim with a guilloche. 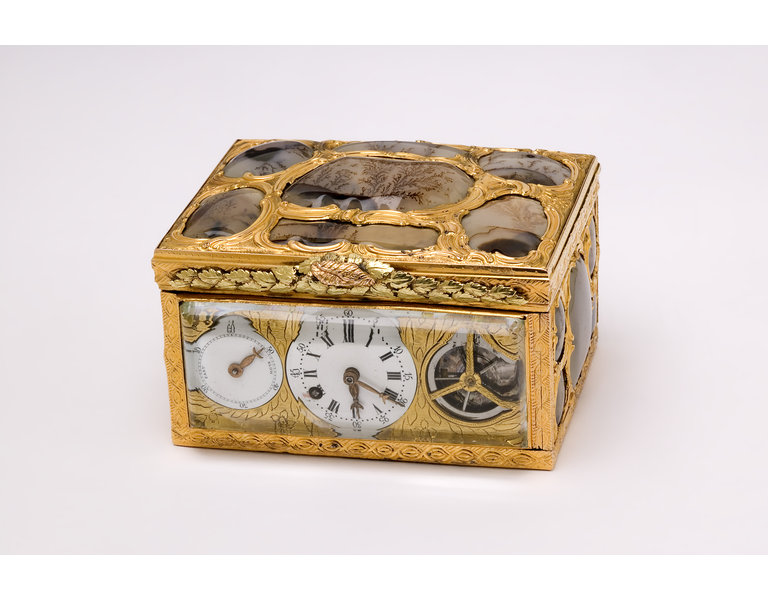