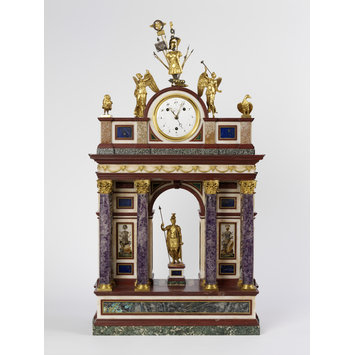 Sir Arthur Gilbert and his wife Rosalinde formed one of the world's great decorative art collections, including silver, mosaics, enamelled portrait miniatures and gold boxes. He donated his extraordinary collection to Britain in 1996.

Giacomo Raffaelli invented the micromosaic technique. His intricate creations, often complemented by hardstone elements, were acquired by European and Russian sovereigns. This clock is one of four ever designed by Raffaelli. Newly discovered archives record that Eugene de Beauharnais, Viceroy of Italy, gave this clock to his mother Empress Josephine for her château of Malmaison, France.

To find out more about the making of micromosaics, watch the video <i>How was it made? Micromosaics </i>here:
https://www.vam.ac.uk/articles/how-is-it-made-micromosaics

A clock mounted on top of a triumphal arch made of red and white antique marble. To the front of the arch are four amethyst columns topped by Corinthian capitals. Between these columns are visible two micromosaic panels depicting military trophies. The clock dial is surmounted by a military trophy that is flanked by the figures of Victory and Fame, with a cockerel and eagle standing on the corners. In the centre and beneath the arch is a gilt-bronze statuette of Mars, standing on a stone base.

Signed and dated on back of marble 'Giacomo Raffaelli fece anno 1804' and on upper clock face 'Breguet, Paris'.

Giacomo Raffaelli was a Roman mosaicist credited with the invention of a new technique which allowed the creation of mosaics with incredibly small pieces of glass in a seemingly infinite range of colours. He was a fantastic businessman and worked with his sons Vincenzo, Filippo, Giovanni, in designing, creating and developing his name through Europe.

Based in Rome, he also had a shop in Milan and received commissions from European and Russian sovereigns, including Emperor Napoleon I, Empress Josephine, and King of Poland Stanislas August II Poniatowski (1732-1798).
Raffaelli worked also in hardstones and bronze to create most fantastic pieces, from gold boxes to fireplace, jewellery to clocks, in the utmost neoclassical fashion.

This clock is one of four clocks uniquely produced by Giacomo Raffaelli between 1801 and 1814. All after the same neoclassical model, they differ in the stone used for their columns: one was made of bloodstone (signed and dated 1801, now in the Hermitage museum, inv. N. Epr-5601), one of Labrador (yet unrecovered), one of malachite (signed and dated 1814, now in the Fersman Mineralogical Museum, inv. N. PDK1712), and one of amethyst which is the Gilbert example.

When Sir Arthur Gilbert acquired this clock, it was thought to have been chosen by the Venetian sculptor Antonio Canova and presented by Pope Pius to Napoleon Bonaparte on the occasion of his coronation in Paris, December 1804. Anna Maria Massinelli recently published undiscovered archives (2018), bringing to light a further fascinating and complicated provenance.

A correspondence between Vincenzo, son of Giacomo Raffaelli and head of the workshop in Milan, and his father, still in Rome, reveals that the clock was made from April to September 1804. Work began in the Milan workshop in April 1804 and was completed by Giacomo in Rome around September/October 1804. In another letter, dated 2 September 1850, Vincenzo explains that the clock was given by Eugene de Beauharnais, viceroy of Italy, to his mother the Empress Josephine, who kept it in her château de Malmaison. After the fall of Napoléon, the clock was sold to Russian collections but unfortunately Vincenzo was find it in St Petersburg palace during his visit in 1850.

The clock then reappears on the art market in 1973, with the following provenance:
‘Napoleon is said to have been presented the clock to Marshal Bernadotte, later King of Sweden, one of whose descendants gave it to Sir Alexander Kleinworth in acknowledgement of financial advice. It passed to his son Mr Cyril Kleinworth, and thence to H. Burton-Jones and to the present owner.”

Provenance
Given to Empress Josephine, Malmaison, by her brother Eugene de Beauharnais.
Somehow in St Petersburg Palace, circa 1815-before 1850.
Said to have been given to Sir Alexander Kleinwort by descendants of Marshal Bernadotte, later King of Sweden.
Thence by descent to Cyril Kleinwort.
Thence by descent H. Burton Jones.
Thence by descent A. Gifford-Scott.
Sale, Sotheby's, London, lot 33, 15 June 1973.
Sold by John Partridge, London, 1976 to Arthur Gilbert. 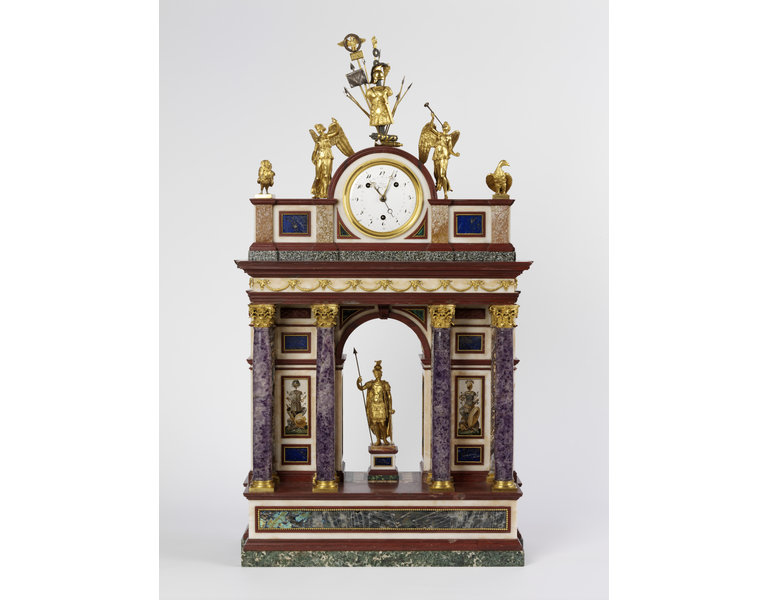