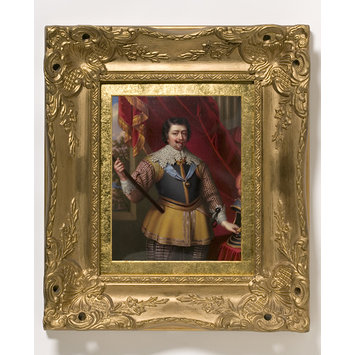 The youngest son of William I of Orange, Frederick Henry (1584-1647) was born only six months before his father's assassination. He succeeded his brother as Stadtholder of the Dutch Republic. His time in power was marked by significant military triumphs and flourishing arts.

In the 17th century, new techniques of painting enamels allowed delicate portraits resembling tiny oil paintings to be created. These enamel miniatures were first fashionable in continental Europe, but were particularly in vogue in Britain from the 1720s to 1760s. Henry Bone (1755-1834) was a successful enameller in England. As a boy, he worked in William Cookworthy's porcelain factory in Plymouth. It was there that he was introduced to the art of enamel painting. He exhibited at the Royal Academy from 1781 and became a Royal Academician in 1811. Many of his enamel portraits are copies of older full-scale paintings, including a series depicting prominent men and women from the Elizabethan period. His sons, Henry Pierce Bone (1779-1855) and William Bone Senior (active 1810-43), followed in his footsteps and became enamellers. Like his father, Henry Pierce Bone made enamel copies of paintings of historical figures.

Rectangular miniature portrait of Frederick Henry, Prince of Orange, Count of Nassau. The sitter is depicted three-quarter length wearing armour, with the Order of the Garter and holding a helmet. He stands in front of a red drapery swag and a landscape. The frame is gilt-wood.

Enamel miniature on copper of Frederick Henry, Prince of Orange, Count of Nassau, with a gilt wood frame, England, 1852, by Henry Pierce Bone.

The younger son of William I of Orange, Frederick Henry
(1584–1647) succeeded his half-brother as Stadtholder
of the Dutch Republic.

England; Henry Pierce Bone (1779–1855)
Enamel on copper in later gilded wood frame
Signed and dated on counter-enamel; inscribed on
counter-enamel incorrectly identifying sitter as
‘Gustavus Adolphus of Sweden, Sept 1852
Painted by Henry Pierce Bone from
a picture in the Gallery of the Earl of
Craven Combe Abbey, Warwickshire’
Museum no. Loan:Gilbert.231:1-2008 [2009] 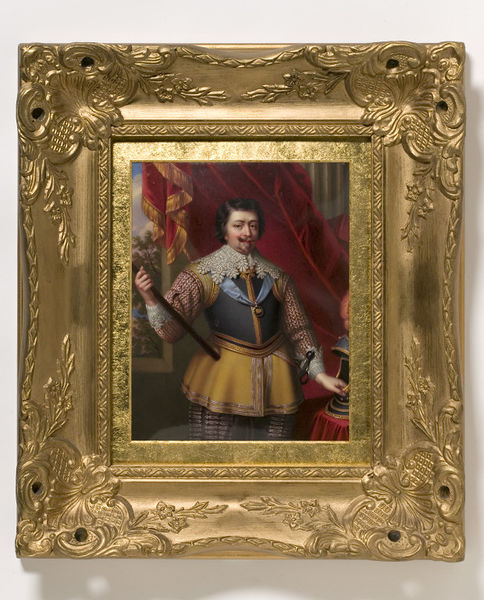