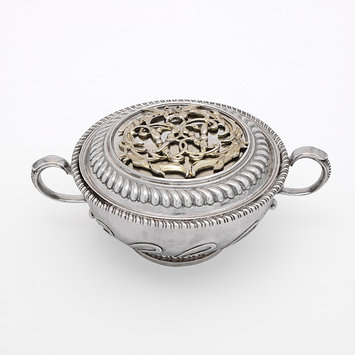 This bowl, one of a pair, was probably used to hold lotions or cosmetics. It once formed part of a 21-piece lady’s toilet service, weighing in total over 11 kilos. The cipher on the cover is for Judith Bridgeman, daughter of Sir John Bridgeman (d.1713), second baronet of Castle Bromwich, Warwickshire.

Outside the wealthiest court circles, 17th century silver was used primarily for eating and drinking. The dining table was the heart of social activity, and novelty items were made for fashionable new drinks flavoured with spices and drinking games. The range of British silver for the home from this period (the first for which a representative quantity survives) demonstrates increasing foreign influences from France, the Netherlands and Portugal. The rising demand for fashionably decorated European silver from the 1660s onwards reflects Britain’s new wealth and political stability.

Two-handled, shallow bowl of circular form on a gadrooned, spreading foot, the lower part of the body decorated with pierced, swirling cut-card fluting, the S-scroll handles moulded with beading. The slightly raised cover has a gadrooned border and an applied cipher, thought to be that of Judith Bridgeman, in the centre within a reeded and chased gadrooned surround. 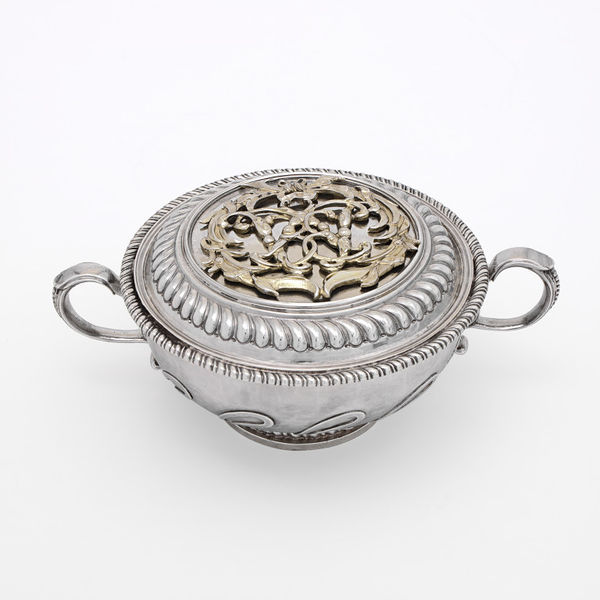