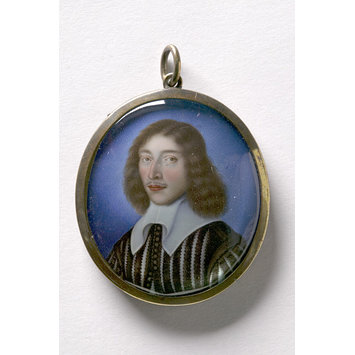 The artist Paul Prieur probably learned enamel painting in Paris around 1640. He worked at the Danish court from 1655, where he was the first to produce portrait miniatures in enamel. Here he has applied the colours in small dots, a technique known as 'stippling'.

In the 17th century, new techniques of painting enamels allowed delicate portraits resembling tiny oil paintings to be created. These enamel miniatures were first fashionable in continental Europe, but were particularly in vogue in Britain from the 1720s to 1760s. Painted enamels were made by firing finely milled glass which had been coloured with metal oxides onto a metal base, usually gold or copper. The colours had to be applied and fired in several stages, according to the firing temperature required by each colour. Incredible precision was needed for a successful enamel portrait, since each firing carried risks of cracks and bubbles that might ruin the entire effort.

Oval portrait miniature of a gentleman with long brown hair and a slight moustache wearing a white lawn collar, a white shirt with a black slashed doublet. The miniature is enamel on gold and the frame is a silver copper alloy.

Concealed Histories:
The V&A is committed to proactive provenance research, which seeks to uncover important information about who owned these pieces before they were acquired by Rosalinde and Arthur Gilbert. This research is important because between 1933 and 1945, Jewish collectors in Germany and Nazi-occupied Europe were systematically deprived of their possessions, and their art collections scattered, sold, confiscated or destroyed. Despite significant efforts after the Second World War by the Allies and governments, many of these objects were never restituted. They ended up in public and private collections who often acquired them without knowing their fate during the Nazis years.
As children of Jewish migrants from Eastern Europe, both Rosalinde and Arthur Gilbert were acutely aware of Nazi crimes, but even they followed this common practice as they assembled their world-class collection. The information below explains what we know and what we do not yet know about the previous owners of these objects during the Nazi-era.

Adolph List founded the world’s first artificial sweeteners factory. His Jewish parents had converted to Protestantism. Yet in 1937, an anonymous letter denounced him and his wife Clara Helene as Jewish. He was removed from his own company and his [comprehensive] collection of European Decorative Arts was sold at auction in 1939.

This object is part of the ‘Concealed Histories’ display, on until 10 January 2021 and intended to widen our appeal for further information on these objects.

Enamel miniature on gold, in a silver-copper alloy frame, Paris, 1645-50, by Paul Prieur.

The painter of this miniature has applied colour in small dots in a technique known as ‘stippling’.

The painter has applied the colours in small dots, a
technique known as ‘stippling’. Paul Prieur probably
learned enamel painting in Paris. He introduced enamel
portrait miniatures to the Danish court, where he
worked from 1655. 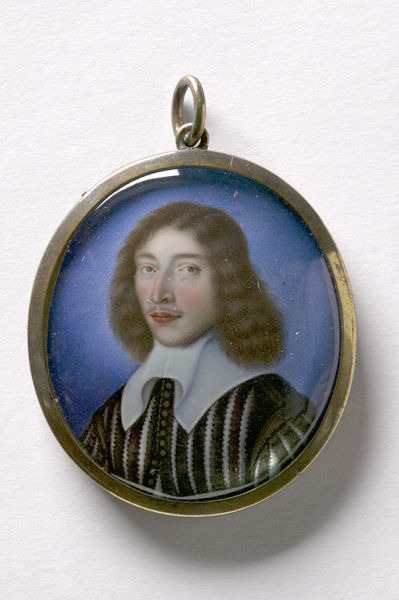