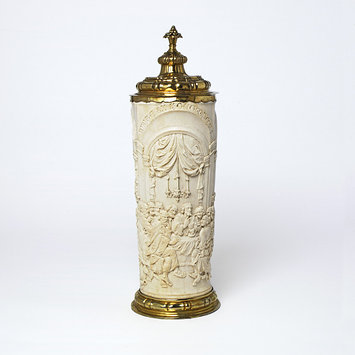 Ivory was a luxury material, and in style and form this large beaker and cover dating from the early 19th century are relatively unusual. It is reminiscent of vessels made during the baroque era, and the religious subject on the main body, 'The Last Supper', recalls liturgical objects. It was probably made as a historicising piece, purely for ornamental purposes. Given the source for the figurative composition, and the style of carving, the ivory is likely to be Netherlandish.

Silver-gilt and ivory beaker of tapering cylindrical form, the beaker carved with a scene of the Last Supper in an architectural setting on a lobed base. The cover is fluted with a bud finial and is engraved with a combined coat of arms.
Within the scene a woman stands at one side holdinga a lantern and pointing towards the main group of Christ and the Apostles, who are seated at the table. On the other side a boy stands with a basket. A chandelier hangs above the main group, and candles are seen elsewhere. Curtains are draped around an interior architectural setting og high arches. Above the main arch is inscribed a Latin inscription.
The silver-gilt base and the lid are each marked 'CB'. Under the base is also the mark 'LL' under a star, with a shield. A double coat of arms is engraved on top of the gilt metal lid, as yet unidentified.

'LL' above star in heart-shaped shield
maker's mark, attributed to Leopold Lichtenschopf
on the silver-gilt and base

'BIBITE EX HOC OMNES'
Bible, New Testament, Matthew 26:27
These words, spoken by Jesus during the Last Supper, are used as part of the words of consecration in Christian eucharistic liturgies.
Drink ye all of it (King James Version)
Drink from it, all of you (New International Version)
Above the main arch inscribed.

Combined coat of arms on lid
None of the two coat of arms appears to be included in the chapter on Bohemian nobility in Siebmachers Wappenbuch.

The Rosalinde and Arthur Gilbert Collection on loan to the Victoria and Albert Museum. Christie's, Amsterdam, 1992, bought by Timothy Schroder for Partridge's, London; sold to Arthur Gilbert in 1993. 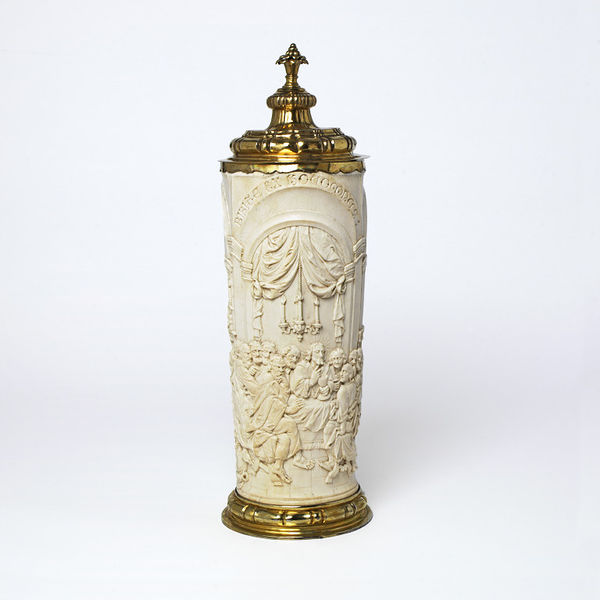