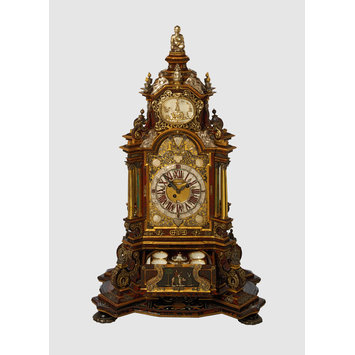 Clocks like this extraordinary piece were famous Augsburg products in early modern times. They showcased the city’s excellence in creating luxury goods, including the decoration of Meissen porcelain.

Gemstones, additional silver mounts and precious veneer from different sources were added in the 19th century to suit the tastes of collectors, such as Lord Roseberry, British Prime Minister from 1894-5. His wife Hannah inherited the great Rothschild mansion Mentmore, where this clock resided until it became part of the Gilbert Collection in 1977. Arthur Gilbert enthused that this clock exhibits ‘every form of decorative art that you could possibly imagine'.

A cabinet clock of architectural form in three sections: a base with shaped borders and volutes at the corners; a central body; and a top storey with a lantern. The cabinet is faced in tortoiseshell, with borders and Corinthian columns at each corner of silver-gilt.
Chinoiserie panels, inlaid mother-of-pearl, ivory, enamel and brass are set around the base and upper storey. The front of the upper storey bears a large mother-of-pearl plaque inlaid with Chinoiserie motifs and relief designs in silver-gilt. Small silver statuettes of Buddha adorn the volutes at the base, the centre of the upper storey, and the pediment of the lantern. Figures from classical mythology appear on the sides of the cabinet.
On the front of the base is a red, velvet-lined drawer containing a Meissen tea service consisting of nine pieces. Below this is another drawer containing a removable square silver-gilt inkwell and pounce pot, and having two rectangular compartments, probably intended to hold pens and keys. There are six keys; one large and five small.
The mother of pearl dial applied with cut garnets and turquoise, the arms are made of micromosaic. The clock mechanism has a calendar movement and is quarter striking.

The clock was probably made for a member of the aristocracy. Anna Maria Massinelli sees a link with the politically influential countly family Schönborn based upon the repeated use of the motif of a rhinoceros in combination with the Schönborn coat-of-arms on works of art from the same period.

Silver-gilt wood, tortoiseshell, silver, mother of pearl and other materials, Augsburg; 1700-1715 and later

Containing an engraved and incised silver frame in the manner of Andreas Thelot (Augsburg 1655-1734); and Meissen porcelain tea service with Augsburg Hausmaler decoration, the gilding attributed to a member of the Seuter family 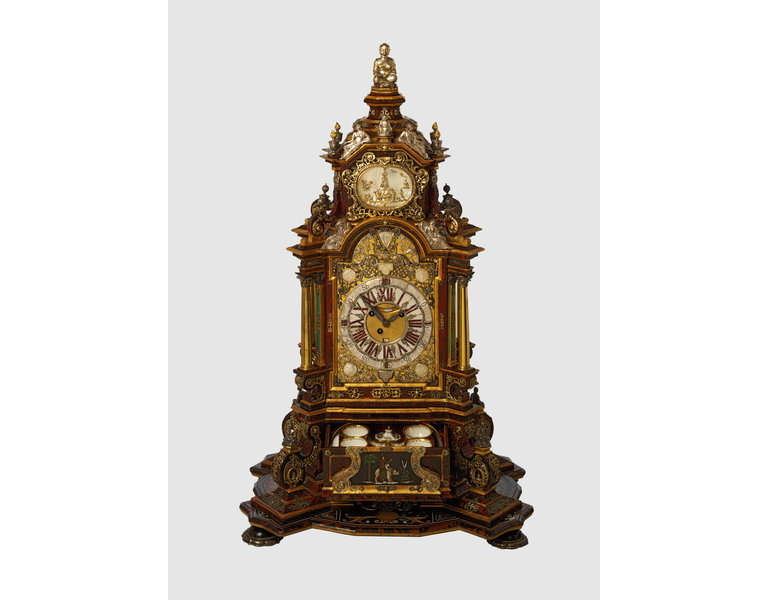