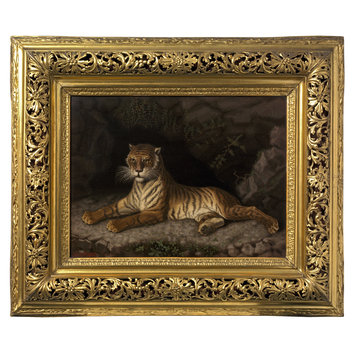 The painting Tigress Lying Below Rocks by the British artist George Stubbs (1724-1806) inspired this micromosaic. Stubb's painting was published as an engraving by John Dixon in 1772, which is probably how the mosaicist made his copy.

Rectangular micromosaic depicting a tigress, her head to the viewer's left, reclining on a rocky ledge in front of the entrance to a cave. The picture is signed in the lower left corner and is in a rectangular pierced and carved gilt frame.

Historical significance: The picture is based on a painting by George Stubbs which was engraved by John Dixon in 1772 as A Tigress A further mezzotint of the painting was published by John Murphy in 1798. The subject was the tigress given to George Spencer, 4th Duke of Marlborough by Lord Clive, Governor of Bengal who arrived in March 1762 in the menagerie at Blenheim.
The species shown is indeed an Indian or Bengal tigress with short fur and widely spaced stripes. Its small rounded head, short nose and lack of ruff indicate gender.

An identical mosaic is in a private collection in Genoa

Decio Podio was related to Enrico Podio, head mosaicist at the Basilica of St Mark's, and also artistic director of the Salviati mosaics firm in Venice from 1879 Venice. The picture was sold to Arthur Gilbert by a private resident of San Francisco who recorded in a letter dated 1974 that the mosaic was "of the late nineteenth century[... It] is in the original carved wood and gilded frame as purchased [in Venice] from the mosaicist who made it. It was purchased directly from the man who made it by the mother of the present owner just prior to the turn of the century."

This is a rare Venetian example of a mosaic technique first perfected in Rome. It was probably created in association with a large Venetian mosaic and glass firm founded by Antonio Salviati. The company primarily produced prefabricated wall mosaics for installation world-wide. This would be a rare, small-scale work.

The painting Tigress Lying Below Rocks by the British artist George Stubbs (1724-1806) inspired this micromosaic. Stubb's painting was published as an engraving by John Dixon in 1772, which is probably how the mosaicist made his copy. 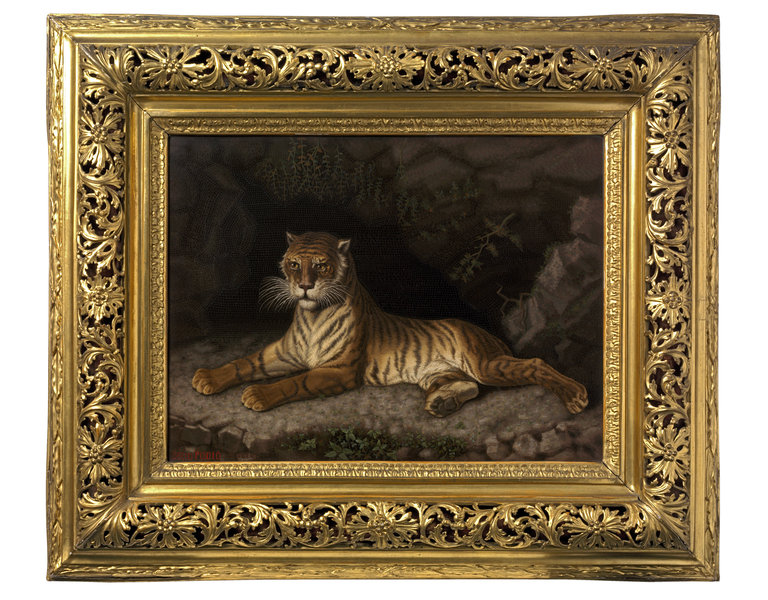