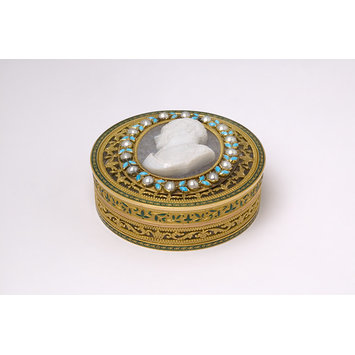 Eugène de Beauharnais, whose portrait appears on this box, was the stepson of Napoleon Bonaparte through his first wife Josephine. A loyal supporter of his step-father, he took part in a number of notable battles. He was married in 1806 to Augusta Amelia, daughter of the Elector Maximilien III, whom Napoleon elevated to royal status as the first king of Bavaria. For much of his career, Eugène was viceroy of Italy but following the overthrow of Napoleon, he took refuge in Munich where he died at the age of 43.

The cameo was carved by Giovanni Beltrami (1779-1854), trained as a stone-cutter under the renowned Giovanni Pichler. He was famed for feats such as cutting twenty figures on a single stone and producing a miniature version of Leonardo da Vinci's Last Supper on a topaz. He worked for a number of European monarchs, including the empress of Austria. Eugène de Beauharnais commissioned several portraits from him, one of which is set in this box. Charles Truman has identified the goldsmith as being Nicolas Lecoufle.

A circular, jewelled, gold-mounted glass bonbonnière, the gold on the cover, walls and base pierced and chased with stylised foliage and bordered by translucent green enamel. The cover is set with a cameo of Eugene de Beauharnais within a wreath of pearls and turquoise foliage.

Post-Revolutionary mark of a French goldsmith, with the initials 'N.L', a crown above, a bird below, identified as Nicolas Lecoufle by Charles Truman
On the bezel

Restricted warranty mark for gold, Paris, May 10, 1838, onward
On the bezel

Signed on the truncation of the cameo 'Beltrami'

1. Bonbonnière with cameo of Eugène de Beauharnais, son of the Empress Joséphine and stepson of Napoleon, 1809–19

The cameo is by Giovanni Beltrami; the maker of the box is Nicolas Lecoufle (the latter identified by Charles Truman) 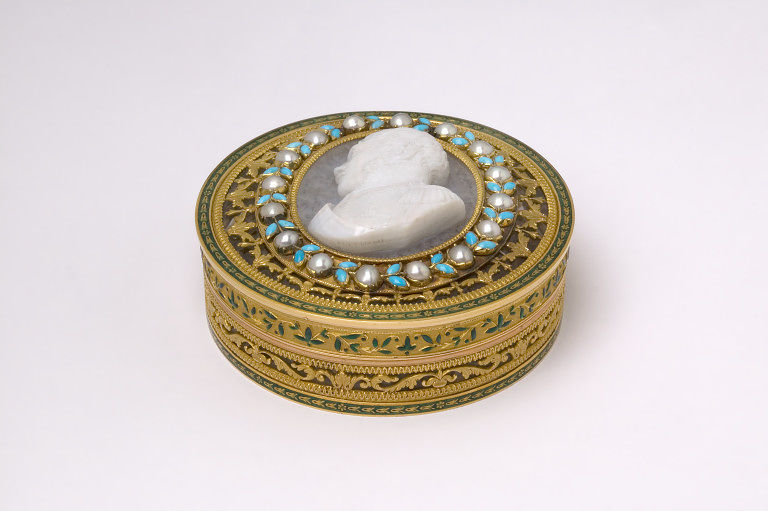