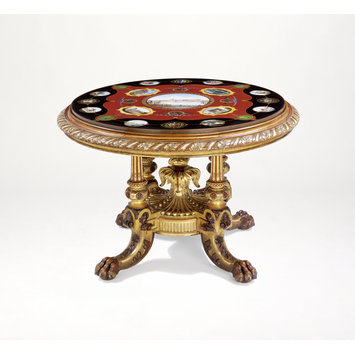 Circular micromosaic tabletops with complex iconological programmes were a specialty of the workshop of Michelangelo Barberi in Rome and are among the most outstanding works ever produced in this medium. Barberi was trained as a painter and the pictorial was central to his œuvre - at times to a degree that seems to defy the very essence of a mosaic. The endless shades of glass colours and the seamlessly colour-matched interstices render the illusion of a painted surface almost perfect.

Barberi postulated that technical perfection was not an aim in itself, but needed to be accompanied by a patriotic calling - a 'service to Rome' and Italy. As a result of this postulation, mosaic as a medium is a message in itself: the ancient art form - as revived and refined in Christian times at the Vatican Workshops - testifies to the successful connection between antiquity and the present, as well as the continuity and renaissance of Roman traditions in Barberi's time.

"The Four Ages of the History of the Eternal City" are the subject-matter of the tabletop, and are introduced by four portrait medals: "a king, a consul, an emperor and a pope." The fourth age, Christianity, is represented by the central view of Saint Peter's Square. The views and trophies on the outer ring are chronologically arranged and need to be read counter-clockwise, beginning with the view of the Palatine Hill as legendary place of the foundation of Rome.

A circular micromosaic tabletop on black marble backing with ancient and Christian monuments of Rome in medallions between wreathed Imperial eagles, all within a red cartouche in a border of sixteen roundels with views of monuments interspersed with trophies and medallions of profile heads representing the four epochs of Roman history. The tabletop depicts the following monuments of Rome: Central medallion Saint Peter's Square surrounded by Colosseum, the Arch of Constantine, the Forum Romanum and the Pantheon; the outer border depicts eighth further sites: Tapejia Fortress, Tomb of the Horatii and Curatii, Temple of Vesta, Grotto of the Nymph Egeria, Mount Palatine, Tomb of Cecilia Metella, Bridge of Luccano and Temple of the God Rediculo. The gilt base has four legs, the top portions fluted above knops supported by square plinths, which end in lion's paw feet. The circular stretcher is fluted on the flat sides and tapers up to a bulbous finial.

Rome (made)
London (made)

Historical significance: The original Roma Cronologica was created for an Irish nobleman, Viscount Midleton. The tabletop in the Gilbert Collection was made for Lord Ward as a second version of this design, and is already mentioned in Barberi's album from 1856. In total, four versions of the tabletop - with some differences - survive intact, and fragments of another version are known.

Micromosaics have their roots in the larger mosaics of ancient Rome used to decorate their walls and floors. The first micromosaics were created in the 18th century, but it was not until Arthur Gilbert himself became interested in collecting them and invented the term 'micromosaics' that they became known as such. The tesserae are minute pieces cut from thin pieces of glass known as smalti filati, and some of the finest micomosaics can consist of as many as 5,000 tesserae per square inch (ca. 3 by 3cm). By the late 18th century Rome had become central to the production of micromosaics and sold them as souvenirs to wealthy foreigners visiting the city. From small elegant snuffboxes to large monumental tabletops, micromosaics could be used to decorate objects of all shapes and sizes. They could even be made to resemble full-sized canvas paintings, and indeed Arthur Gilbert himself mistook his very first micromosaic for a painting. When he brought it home to show his wife, he had to convince her that it was not in fact a cracked painting, as she supposed, but a mosaic.

According to Barberi, ‘the four ages of the history of the eternal city Rome’ are at the heart of this table. It shows the Christian centre of St Peter’s Square, surrounded by monuments
of ancient Rome. This design was first made for Viscount Midleton, but this second version was created for Lord William Ward.

Michelangelo Barberi made the top and the base was made by C.Hindley & Sons. 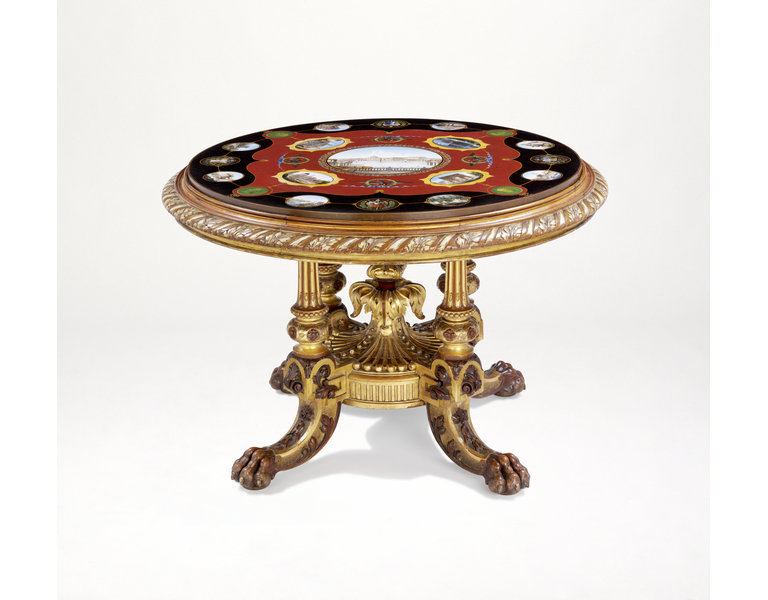