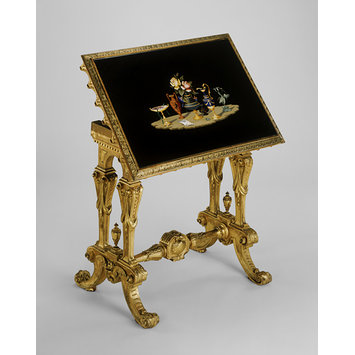 Pietre Dure means ‘hard stones’ in Italian. Mosaics of hardstones, or commessi di pietre dure, were made during the Roman Empire and throughout the medieval period. But it was not until the Renaissance in Florence that the technique was perfected, under the impulse of Ferdinando I de’ Medici (r.1587-1609), Grand Duke of Tuscany who united the city’s workshops and channelled their creativity into one organisation, the Opificio delle Pietre Dure.

Sir Arthur Gilbert and his wife Rosalinde formed one of the world's great decorative art collections, including silver, mosaics, enamelled portrait miniatures and gold boxes. Arthur Gilbert donated his extraordinary collection to Britain in 1996. Arthur Gilbert was also fascinated by the evolution of pietre dure and purposefully acquired 16th-century masterpieces as well as 20th-century creations.

This hardstone table top demonstrates the interest in neoclassical themes associated with the designs of Antonio Cioci (died 1792) in late nineteenth-century Florentine private mosaic workshops; showing a synthesis of the most popular motifs used by the court workshops: flowers, the trompe l'oeil pearl necklace, the shell, the 'Roman' bronze lamp. The eye is tricked into believing that the objects are three-dimensional.

Rectangular tabletop of black marble inlaid with a pietre dure still life of vases of flowers and neoclassical vases. The gilt wood table base is carved in the Renaissance-revival style and has four legs with scroll feet and a stretcher. The top section is on a hinge so that it could be inclined, thereby becoming a work of art to be appreciated like a painting on an easel.

This table is typical of the revival in neoclassical themes in late nineteenth-century Florentine pietre dure. Neoclassical compositions, with vases all’antica after archaeological founds, were introduced to the Opificio by the painter Antonio Cioci (d. 1792), the first being a table top in porphyry, dated 1784, now in the Galleria Palatina, Florence. He then added coral, pearls and shells to soften their disarming realism. These compositions were taken on by his successor, Carlo Carlieri, (active 1781-1822), whose designs were exclusively on paper instead of on canvas, and became much cherished under the Napoleonic Era – such as a table for Maria-Luisa of Bourbon, dated 1807, now in the Instituto Valencia de don Juan, Madrid. They were then revived under the direction of Nicolo Betti (active 1851-1876). In the meantime, private workshops flourished in Florence and created products of proven success, evocative of the Opificio’s masterpices: Still lifes with bouquets of flowers, accompanied with coral, shells, pearls and ribbons. They are usually on common and less costly black marble, but are sometimes found on porphyry ground.

This table also includes a fine green ribbon of malachite, the utmost fashionable stone in the 19th century. A discovery of large Russian deposits in the 1820s made malachite a luxurious material for hardstone creations, duly exploited by the Demidov family in their Ural mines.

The stand of the Gilbert table, in the Renaissance-revival style, remained fashionable until the early 20th century as demonstrated in photographs of the Ugolini workshop stand at the Paris Exposition Universelle, 1900 (Massinelli, 2000, p.14, fig.1).

Spotlight on Conservation
Each object depicted was made as a commesso di pietre dure, which was then inlaid into the black Belgian marble slab. This table top, like many others in the collection, combine hard and soft stones that were polished individually according to their hardness to achieve a unified polished surface.

The greyish vase holding the bouquet of roses is made of a thin layer of rock crystal which has been inlaid into the black marble. Instead of using different stones for different colours, some stones have been heated to produce various shades. The Tuscan stone calcedonio di Volterra for example, has been used in its natural state and heated in some areas to produce an array of yellow shades such as the first vase on the left and the rose in full bloom. This change of colour through heating occurs because of the iron content of the stone. Upon application of heat, it produces a deep, reddy shade. The other rose in full bloom is made of red calcedonio di Volterra, which naturally has this shading.

The coarse grey marble inside the shell was covered with a piece of rock crystal, too, to create the concave perspective. Serpentinite, a metamorphic rock, is used to imitate the patina of the bronze lamp. The name comes from the notion that the texture of the stone is very similar to that of a snake’s skin. The pearls inside the first vase are probably made from precious opal.

Similar to tabletop in Sale of Collection of Gianni Versace, Sotheby's, New York, May 21, 2005. 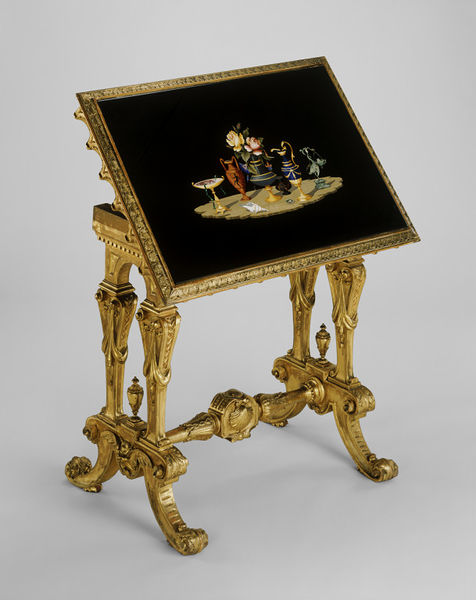