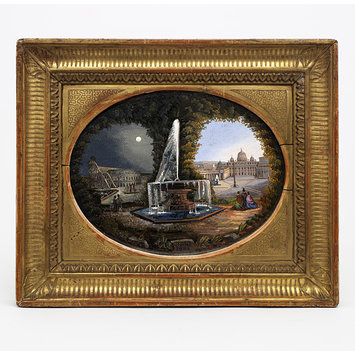 Rome by Night and Day

This mosaic reveals itself as a souvenir from Rome: Ricordo di Roma is noted on a stone at the bottom of the centre of the mosaic. It is indeed a precious token from the Eternal City, as were available from several private workshops in the vicinity of the Spanish Stairs during the 19th century. Many of the mosaicists established in this part of town also worked for the Vatican Workshop where they might also have received their training. Possibly the most famous member of this group was Michelangelo Barberi upon whose designs this mosaic is based.

In 1856, Barberi published some of his work with illustrations, including a lavish tabletop made for Pedro de Sousa Holstein, Duke of Palmela (1781-1850). When comparing the present version with the same motifs on Barberi's tabletop (LOAN:GILBERT.921-2008), it is evident that the range of colours is very similar, whilst the tesserae used for this mosaic are significantly larger in this plaque. The interstices in this picture are also larger and the grout is coloured in to achieve a painterly effect.

Other versions of differing quality depicting the same motif - and also mounted within contemporary carved and gilt wood frames - are known. It appears very likely that the published designs by Barberi were also copied outside his workshop. The use of mother-of-pearl for the moon can also be found on the table signed by Barberi, but not on another version in a private collection. Visiting the Colosseum by moonlight was recommended by guidebooks of the 19th century, but Barberi offers another, symbolic explanation: the night as a time for reflection and "grave thoughts" also refers to the darker side of the history of the monument. According to general belief, the Colosseum was a place of martyrdom during the persecution of Christians; thus the general atmosphere of this scene is charged with symbolic meaning.

Oval micromosaic plaque of Roman monuments, depicting the fountain in front of the Villa Medici in Rome in the centre with the moonlit Colosseum by night on the left and St. Peter's Square by day on the right, and figures on both sides; the entire scene framed by foliage; in original rectangular giltwood frame

Micromosaics have their roots in the larger mosaics of ancient Rome used to decorate their walls and floors. The first micromosaics were created in the 18th century, but it was not until Arthur Gilbert himself became interested in collecting them and invented the term 'micromosaics' that they became known as such. The tesserae are minute pieces cut from thin pieces of glass known as smalti filati, and some of the finest micomosaics can consist of as many as 5,000 tesserae per square inch (ca. 3 by 3cm). By the late 18th century Rome had become central to the production of micromosaics and sold them as souvenirs to wealthy foreigners visiting the city. From small elegant snuffboxes to large monumental tabletops, micromosaics could be used to decorate objects of all shapes and sizes. They could even be made to resemble full-sized canvas paintings, and indeed Arthur Gilbert himself mistook his very first micromosaic for a painting. When he brought it home to show his wife, he had to convince her that it was not in fact a cracked painting, as she supposed, but a mosaic. 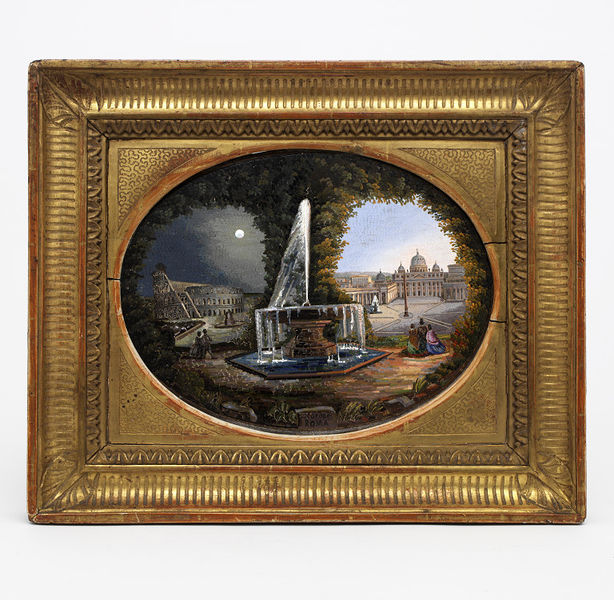