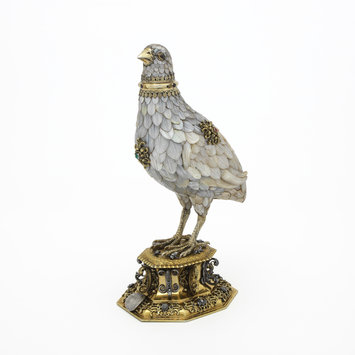 The Nürnberg maker Jörg Ruel, who made this cup and cover in the form of a partridge, was known for setting precious materials and natural curiosities in mounts of gilded silver. This cup is notable for the naturalistic effect of the carving. A similar cup by the 16th-century Nürnberg goldsmith Friedrich Hillebrandt can be found in Dresden.

The Rosalinde and Arthur Gilbert Schatzkammer is one of the few collections of its kind formed in the late 20th century. The Schatzkammer, or treasury, was a new concept in the 16th century. It referred to a special chamber in which the most precious artefacts of a princely collection were housed. Gold and jewelled objects were mounted alongside exotic natural curiosities, including rock crystal, nautilus shells and ostrich eggs. Together they demonstrated not only the wonders of nature and the technical achievements of the artist, but also the intellect and culture of the patron.

Silver-gilt, gold, gems and mother-of-pearl cup in the form of a partridge with feathers of overlapping mother of pearl; removable head with gem set eyes, standing on an octagonal plinth.

(Gallery 70, case 6)
4. Partridge cup
1598–1602
The Nürnberg maker Georg Rühl was known for setting precious materials and natural curiosities in mounts of gilded silver. Four partridge cups of this type were mounted in Nürnberg at the same time, with princely and royal associations. This cup became the so-called ‘supporter’ of Arthur’s coat of arms when he was knighted in 2001.
Nürnberg, Germany; Georg Rühl (1598–1625)
Mother-of-pearl, gilded silver, silver, garnets and emeralds
Formerly in the collection of Baron Leopold de Rothschild (1845–1917)
Museum no. Loan:Gilbert.60:1, 2-2008 [16/11/2016] 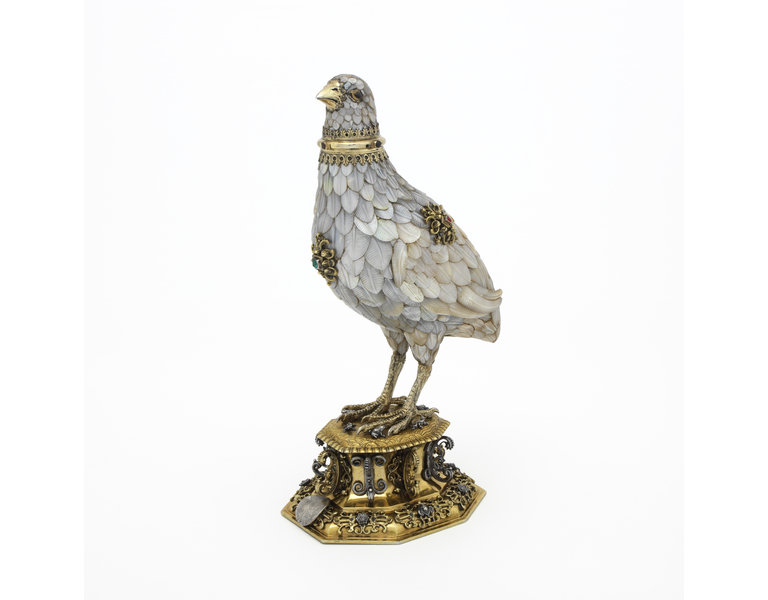