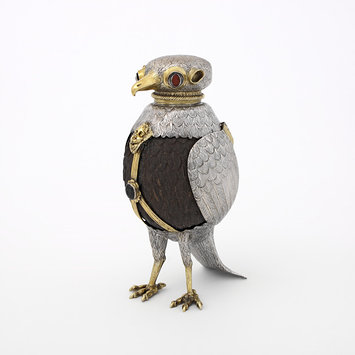 Drinking vessels in the form of owls and birds of prey were popular in German-speaking lands during the 16th and 17th centuries. On this example, the coconut shell has been carved with feathers and the silver mounts include wings with hinges which move as the cup is lifted to drink from.

The piece is also evidence of beliefs held at the time: a small bloodstone amulet engraved with a scorpion was mounted on the breast of the bird as a guarantee against poisoning. While the image of the scorpion was thought to prevent poisoning outright, the amulet's material was believed to protect against haemorrhage, a common effect of poisoning.

The Rosalinde and Arthur Gilbert Schatzkammer is one of the few collections of its kind formed in the late 20th century. The Schatzkammer, or treasury, was a new concept in the 16th century. It referred to a special chamber in which the most precious artefacts of a princely collection were housed. Gold and jewelled objects were mounted alongside exotic natural curiosities, including rock crystal, nautilus shells and ostrich eggs. Together they demonstrated not only the wonders of nature and the technical achievements of the artist, but also the intellect and culture of the patron.

Cup in the form of a falcon, the coconut body carved with feathers, the remaining body is of silver with silver-gilt talons and lower legs, a silver-gilt vertical strap connects the lower and upper body with a putto mask at the junction, and at the mid point, an ancient Roman intaglio of a scorpion. The cover is shaped as a falcon's head, the beak and ears are gilded and the eyes inset with carnelians.

Ulm hallmark and Ulm maker's mark of either Samuel or Hans Kässborer
Marked on tail and rim of cup, for marks see Rosenberg 3, no. 4772); the lid apparently unmarked
(Rosenberg, no. 4772)

'B' in lozenge-shaped punch
Punched on underside of both wings and rim of cup and on inside of lid (obscured by later seal)
Austrian tax mark for 'old' silver submitted to the Prague tax commission in 1806/1807 (for detailed discussion of this mark, see: Rohrwasser, Alfred. Österreichs Punzen. Edelmetall-Punzierung in Österreich von 1524 bis 1987. 2nd ed. Perchtoldsdorf: Verlag Bondi, 1987. Pp. 10-11.)

Parcel-gilt mounted coconut cup in the form of a falcon, the coconut body carved with feathers, the remainding body is of silver with silver-gilt talons and lower legs, Germany, ca, 1600

12. Cup in the form of a falcon
About 1600
Drinking vessels in the form of owls and
other birds of prey were particularly popular
in Europe during the 16th and 17th centuries.
The hinged wings of this cup can be moved
to mimic the falcon raising its wings.
Ulm, Germany; possibly Samuel or Hans Kässborer (active 1600–10)
Coconut shell, partially gilded silver and bloodstone and carnelian
Museum no. Loan:Gilbert.61:1, 2-2008 [16/11/2016]

Maker's mark possibly that of Samuel or Hans Kässborer (Rosenberg, no. 4772) 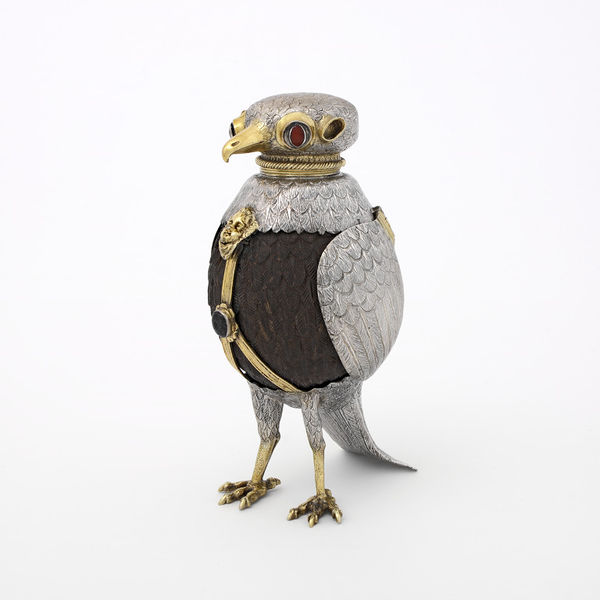