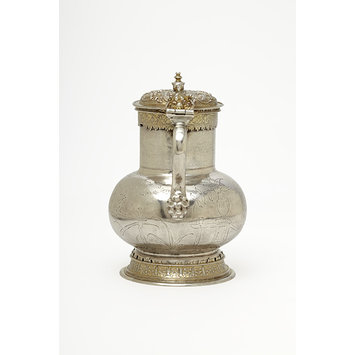 In its present state, this jug provides a revealing insight into late 17th century attitudes towards old plate. The body, although not hallmarked, can be dated by its style to about 1680. However, the mounts predate the body by more than a century. It is likely that the mounts were originally made for a glass vessel which was accidentally broken and replaced by a silver body in the same shape, decorated in the 17th century fashion.

A silver and silver-gilt bulbous lidded pot with a cylindrical neck rests on a slightly spreading foot. The body is flat-chased with chinoiserie scenes including figures, exotic birds and foliage. The neck is decorated with pounced matting. The S-scroll handle terminates at its lower junction in a lion-mask. The silver-gilt foot mount is stamped with stylised foliate motifs, and foliate tongues above. The lip is mounted similarly with chased foliate-and-scroll designs with foliate tongues. The slightly raised cover is chased with foliage-and-scrolls on a matted ground. The thumbpiece is in the form of a mermaid and the cover is surmounted by a baluster finial.

Historical significance: In its present state, the pot provides a revealing insight into late seventeenth century attitudes towards old plate. The body, although not hallmarked, almost certainly dates from about 1680-85, since virtually all hallmarked plate decorated in this style is of that period. The most likely conjecture is that the original body, possibly of glass, was accidentally broken around that time and replaced by a silver body that reproduced the form of the original vessel while being decorated in the current fashion (...see: cat. no. 31). Antiquarian interest in plate rarely existed before the nineteenth century, so it was more probable that the mounts were preserved because the pot was a family heirloom...(Schroder, 1988, pp. 40, 43).

(Gallery 70, case 1)
10–14. Mounted wares
Inexpensive objects of turned wood and stoneware, and more costly glass vessels were transformed by the addition of silver, pewter
or gold mounts. These metal bands, often decorated in the latest fashion, protected and enhanced the objects. 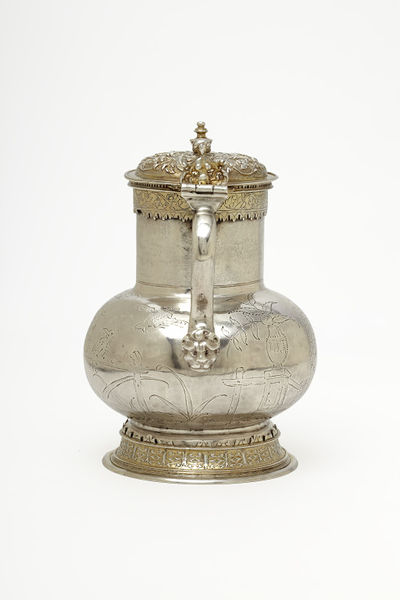