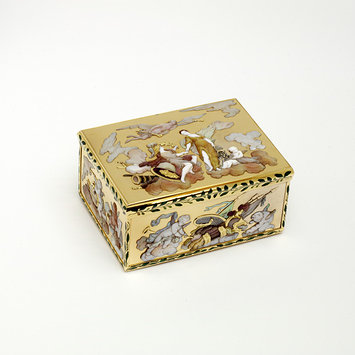 Claude de Villiers, whose mark appears upon this box, was one of the privileged goldsmiths working directly for the French royal household at the Gobelins factory in Paris. Vallayer may have made the whole box and de Villiers may just have had it assayed, or de Villiers may have made the frame for Vallayer's panels. The box is decorated with a number of mythological and allegorical scenes. Upon the lid, the goddess Minerva is depicted. Minerva was the virgin Roman goddess of warriors, poetry and crafts.

Rectangular gold snuffbox, each side of which is set with a panel decorated in mother-of-pearl and various other shells with allegorical scenes. On the cover Minerva greets Plenty beneath Victory; on the base is an infant Hermes and two putti with a ship in full sail; the walls depict the Arts and Sciences, mounted in a cagework of gold, enamelled in translucent green with a trailing olive branch.

Gold panels inlaid with mother of pearl and various other shells mounted in a cagework of enamelled gold.

Gold panels inlaid with mother-of-pearl and various other shells, mounted in a cagework of enamelled gold, Paris, 1747-8, Claude de Villers and Joseph Vallayer

This is an extraordinarily rare example of a box with well-documented royal provenance. A box, probably the one seen here, ‘incrusted on a gold ground representing Peace’, was supplied by Joseph Vallayer to the French royal household in 1749 for 2600 livres. 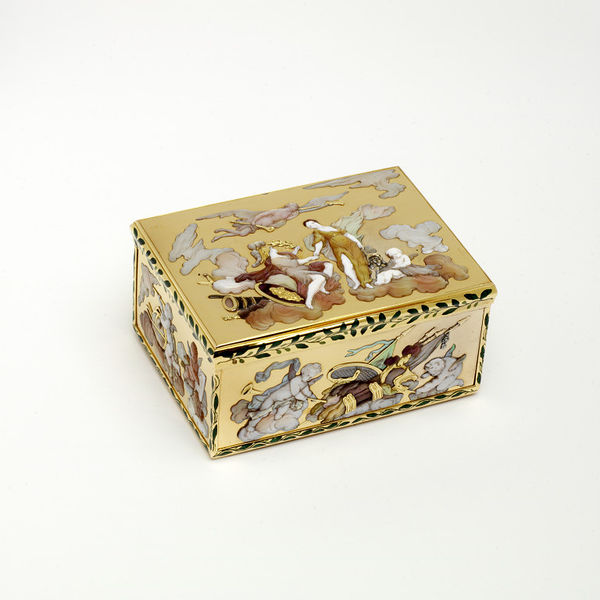