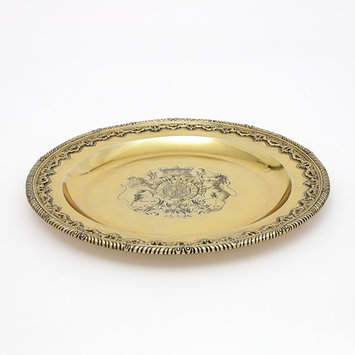 This magnificent dish, one of a pair, is engraved with the arms of Frederick, Prince of Wales (1707-51), although the applied ornament is quite conservative for this date. It is from a set ordered by THomas Lumley Saunderson, 3rd Earl of Scarborough, treasurer to the Prince, who wanted to commemorate this relationship.

When Louis XIV revoked the Edict of Nantes in 1685, Huguenots (French Protestants) were forced to leave the country. Many were craftsmen who settled in London. Their technical skills and fashionable French style ensured the luxury silver, furniture, watches and jewellery they made were highly sought after. Huguenot specialists transformed English silver by introducing higher standards of craftsmanship. George Wickes produced silver of a comparable quality and may have collaborated with second generation Huguenot goldsmiths in the production of newly introduced forms, such as the soup tureen and sauceboat, and a new repertoire of ornament, with cast sculptural details and exquisite engraving.

Circular, silver-gilt dish with gadrooned border chased at intervals with leaves within an applied band of scrolling strapwork and foliage on punched ground, the centre engraved with the Royal coat of arms and Garter motto.

Engraved with the coat of arms of Frederick, Prince of Wales the Royal Motto ICH DIEN and the Garter motto HONI SOIT QUI MAL Y PENSE.
'I serve' and 'shame on him who thinks evil of it'

These dishes celebrated Thomas Lumley-Sanderson's appointments to Frederick Louis, Prince of Wales. He served the Prince as Equerry from 1726-7 and as Treasurer and Comptroller of the Household from May 1738. He took his seat as 3rd Earl of Scarbrough in the House of Lords on 14 February 1739/40. They are from a group of eleven dishes and eighteen plates referred to in WIckes's ledgers under the account of Lord Scarbrough. The eleven dishes weighed 470 ounces and 15 pennyweights, priced at 7 shillings 6 pence per ounce with a total cost of £176 10 shillings and 6 pence; the engraving of the heraldry cost £1 for eight of the dishes and £1 10 shillings for the three larger dishes and the associated plates in the set. The cost of gilding the dishes was 2 shillings per ounce and came to a total of £87 1 shilling. Gilded silver dishes were often used in serving dessert.

(Gallery 71, case 4)
1, 5. Pair of dishes
1739–40
These magnificent dishes are engraved with the arms of Frederick, Prince of Wales (1707–51). They are from a set ordered by the Earl of Scarbrough, treasurer to the Prince, who wanted to commemorate his royal appointment. These dishes are similar to other objects made 20 years earlier. Their traditional style reflects Scarbrough’s personal taste.
London, England; George Wickes (1698–1761)
Gilded silver
Museum nos. Loan:Gilbert.718, 719-2008 [16/11/2016] 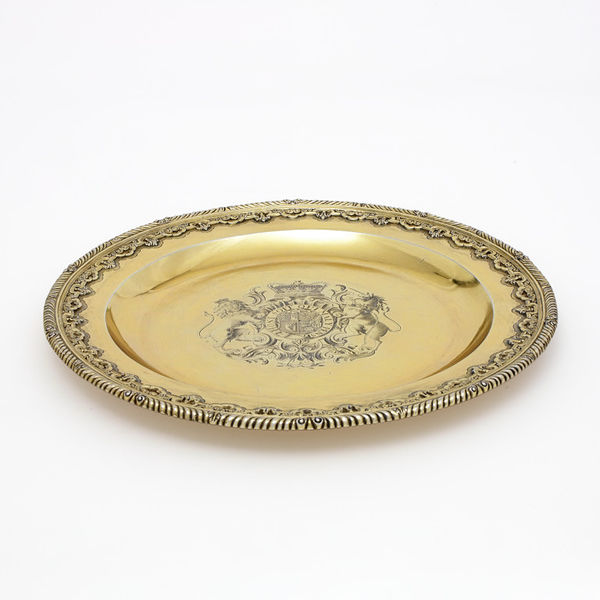