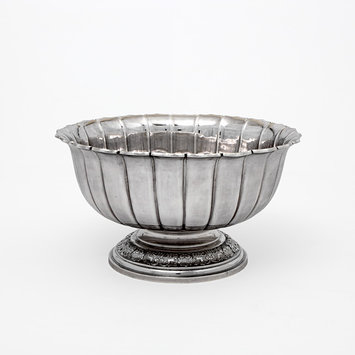 This bowl and its accompanying dish, still in brilliant condition, were made for John Spencer, grandson of the 1st Duke of Marlborough. They were formerly at the Spencer family home, Althorp, in Northamptonshire, where the bowl was traditionally used for christenings.

When King Louis XIV revoked the Edict of Nantes in 1685, Huguenots (French Protestants) were forced to leave the country. Many were craftsmen who settled in London. Their technical skills and fashionable French style ensured that the luxury silver, furniture, watches and jewellery they made were highly sought after. Huguenot specialists transformed English silver by introducing higher standards of craftsmanship. They promoted new forms, such as the soup tureen and sauceboat, and introduced a new repertoire of ornament, with cast sculptural details and exquisite engraving.

The circular bowl stands on a stepped, spreading foot chased with a band of shells, scrolls and foliage on a punched matted ground, the sides are nearly straight, chased with broad vertical fluting and a shaped everted lip, the Spencer and Carteret families' coat of arms is engraved in the centre.

Engraved with the arms of the Spencer and Carteret families; for Spencer
Quarterly argent and gules, in the second and third quarters a fret or, on a bend sable three escallops of the first
and for Carteret four fusils in fess argent

Paul de Lamerie (1688-1751) was the greatest silversmith working in England in the 18th century. A Huguenot or French Protestant he came to London with his parents, fleeing persecution in France. His success lay in his own exceptional creativity in producing stunning objects, but also in his ability as a businessman, retailing some astonishingly spectacular silver using the best and most innovative suppliers in the trade.

Christenings often took place in a domestic setting shortly after the birth of the child. Baptism in the home was accepted practice when necessity so dictated – particularly when the child was weak and not expected to live. In addition to ‘the Ministration of Publick Baptism of Infants to be used in the Church’, the Book of Common Prayer includes the order of service for ‘The Ministration of Private Baptism of Children in Houses’. The ‘Curates of every Parish’ are to recommend that the people ‘defer not the Baptism of their children longer than the first or second Sunday next after their birth or other Holy-day falling between’. An earlier example of a silver basin marked by London goldsmith Anthony Nelme, 1692, used as a Christening basin and subsequently engraved with the arms of Sir Matthew Featherstonhaugh, 1st Baronett, and his Huguenot wife Sarah Lethieullier, remains in the collection at Uppark (National Trust).

Sir Arthur Gilbert collected over twenty-five pieces marked de Lamerie. On display in the Rosalinde and Arthur Gilbert Galleries in addition to this sauceboat of 1726-7, are a pair of 1722-3 soup tureens and later soup ladles. The most elaborate pieces were modelled and chased by the celebrated ‘Maynard Master’ in de Lamerie's workshop. These include the 1738-9 Le Quesne tea kettle,1743-4 coffee pot, the 1742-3 Mountrath ewer and the 1743-4 two handled cup and cover, a 1736-7 waiter and a pair of 1742-3 salvers. The candelabra and bread basket supplied by de Lamerie in 1731-2 for Britain's first Prime Minister, Sir Robert Walpole were acquired as GIlbert was as interested in the association with leading past collectors as in the craftsmen who supplied and made this extraordinary silver. 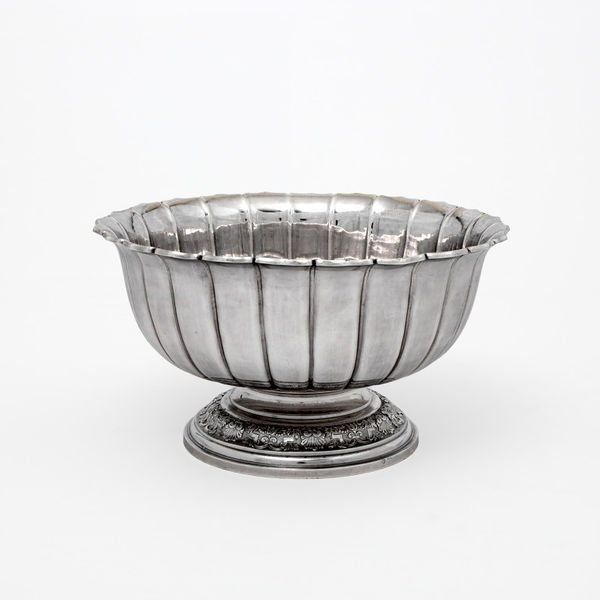