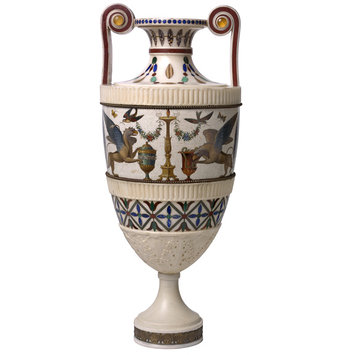 Sir Arthur Gilbert and his wife Rosalinde formed one of the world's great decorative art collections, including silver, mosaics, enamelled portrait miniatures and gold boxes. He donated his extraordinary collection to Britain in 1996.

In the 1700s and 1800s, vases were prized objects that highlighted their owner’s status. Makers employed innovative techniques, adapting materials to new shapes, like the use of glass mosaics on the curved marble surface of these vases. They were most likely given by Pope Pius VII to Emperor Napoleon Bonaparte on the occasion of his coronation in December 1804.

To find out more about the making of micromosaics, watch the video <i>How was it made? Micromosaics </i>here:
https://www.vam.ac.uk/articles/how-is-it-made-micromosaics

One of a pair. White marble two-handled vase, the lower body with a band of vertical acanthus leaves carved in relief below a band inlaid with coloured lozenges and palmettes of jasper and lapis lazuli. Framed by incised colonnaded bands and rows of beading, the upper body displays a micromosaic frieze depicting two griffins each holding a vase. A candelabrum between the griffins supports two festoons of flowers, the ends of which are held up by two birds. The waisted neck is inlaid with varicoloured hardstones as are the handles.

Giacomo Raffaelli was a Roman mosaicist credited with the invention of a new technique which allowed the creation of mosaics with incredibly small pieces of glass in a seemingly infinite range of colours. He was a fantastic businessman and worked with his sons Vincenzo, Filippo, Giovanni, in designing, creating and developing his name through Europe. Based in Rome, he also had a shop in Milan and received commissions from European and Russian sovereigns, including Emperor Napoleon I, Empress Josephine, and King of Poland Stanislas August II Poniatowski (1732-1798). Raffaelli worked also in hardstones and bronze to create most fantastic pieces, from gold boxes to fireplace, jewellery to clocks, in the utmost neoclassical fashion.

Vases were one of his most sought-after objects, produced often in conjunction with a fireplace. Such presents were chosen by the sculptor Antonio Canova for Pope Pius VII among the gifts he was intending to give on the occasion of the imperial coronation of Napoleon as Emperor in December 1804. While the fireplace is still in the Château of Malmaison, the vases were sold after Napoleon’s fall in 1815. This present vase and its pair (Loan-Gilbert. 110-2008) were considered as the lost gifts, but the description in the inventory reads: ‘formés vers leur panse de tableaux mosaïques’ which refers to mosaic medallions into the body of the vase instead of a large frieze as here.

There is a similar vase in a private collection in Rome. A mantelpiece in the Louvre, Paris , is decorated with a frieze of scrolling vines, animals including griffins similar to those on these vases. The subject matter was inspired by ancient classical mosaics including those at the Baths of the Seven Sages, Ostia.

Inspired by ancient Roman mosaics, possibly from Baths of the Seven Sages, Ostia.