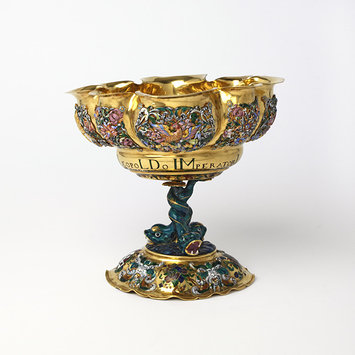 This gold cup is a rare and outstanding example of the splendour and style associated with the court and collections of Emperor Leopold I of Austria. Leopold’s profile decorates the bowl of the cup which also features the inscription Long life and prosperity for Leopold I. Hidden within the inscription is the date 1665. On the foot the initials and armorial of Georg Nikolaus Graf von Rosenberg, a courtier and counsellor of Emperor Leopold I can be seen.

The circumstances of the commission of this splendid treasure are unknown, but it is likely that it was exchanged as a gift between the two men commemorated on it. Leopold I’s Schatzkammer in Vienna was one of the treasure troves of Europe in the late seventeenth century, and Leopold I took an active interest in adding to the collection of precious objects. He also used and re-used pieces from the Imperial collection as gifts to courtiers.

The cup has no hall mark or maker’s mark, but Augsburg and Vienna had goldsmiths able to produce a work of such sophistication and with three different types of enamelling.

The cup was acquired in 1984 for the Rosalinde and Arthur Gilbert Collection, then Los Angeles. Sir Arthur Gilbert and his wife Rosalinde formed one of the world's great decorative art collections, including silver, mosaics, enamelled portrait miniatures and gold boxes. Arthur Gilbert moved his extraordinary collection to Britain in 1996, it is on long-term loan to the Victoria and Albert Museum.

The cup is of oval form reminiscent of a flower and stands on a domed foot with a shaped border; the figural stem with three intertwined enamelled dolphins; the bowl decorated with pierced painted enamel plaques of flowers and birds, the front plaque also mounted with a cast profile of Emperor Leopold I; the foot decorated with flowers in basse-taille enamel and grotesque masks in painted enamel, the counter enamel on the inside also showing grotesque masks; a Latin inscription to Emperor Leopold I and the Imperial double eagle as basse-taille and cloissone enamel on the base of the bowl; the coat-of-arms of Graf Nikolaus Georg von Rosenberg in cloissone enamel on the foot of the cup.

Engraved and filled with enamel 'LeopoLDo IMperatorI sIt LongaeVa VIta et prosperItas'
Long life and prosperity to Emperor Leopold
The entire inscription is in capital letters, yet some of them are larger than the others and when treated as Roman numerals and added together equal the date 1665. Such chronogramms were very popular in the seventeenth century. Graf Georg Nikolaus von Rosenberg also used a chronogramm for an inscription in his castle near Tainach in Carinthia, Schloss Grafenstein.

The initials above the coat-of-arms on the foot are those of Georg Nikolaus von Rosenberg (1623-1695, from 1681 Reichsgraf Georg Nikolaus von Orsini und Rosenberg), member of a Catholic noble family in the Austrian region of Carinthia. His father Johann Andreas von Rosenberg (1600-1667) was a strong supporter of the Habsburg dynasty and the Catholic faith during the Thirty Years’ War and subsequent years. Georg Nikolaus was an Imperial envoy for peace negotiations in Ulm in 1648 when - aged 25 - he had already held the office of Regierungsrat für Innerösterreich (councilor for central Austria) and wirklicher Kämmerer (chamberlain). During the following decades he was appointed Landesverweser and Burggraf in Carinthia by Emperor Leopold I, both very senior offices that came with large estates.

During the lifetime of Georg Nikolaus his Klagenfurt-based dynasty was elevated from the rank of Freiherr (baron) to Graf (count, 1648) and finally Reichsgraf (Imperial count, 1681), a rapid social career that was echoed in the acquisition of estates in areas that are now part of Austria, Hungary and the Czech Republic (Neue deutsche Biographie, Berlin 2005, vol. 22, pp. 58-59). The dynastic ambition of the Rosenberg family is also reflected in a Latin volume on the family’s origins written by Jesuit Johann Ludwig Schönleben: Rosa Ursina in Provinciis Austriacis Florens … , Salzburg: Johann Baptist Mayr, 1680. The title of this volume translates roughly into “The bearlike rose flourishing in the provinces of Austria” and refers to the adoption of the surname of an extinct Italian princely family, the Orsini, upon elevation to the rank of Reichsgraf in 1681.

When Leopold I was elected as Emperor of the Holy Roman Empire in 1658 his reign was by no means unchallenged by other Electoral families. While internally just starting to recover from the Thirty Years’ War, the empire was under threat from the Ottoman Empire. Hence Leopold I had himself portrayed as leader in war and peace alike from the beginning of his reign. His profile on the cup highlights the typical Habsburg features of the large nose and pronounced lower lip, which made him immediately recognisable as a member of this dynasty. The laurel is a reference to the Emperors of ancient Rome and features regularly in portraits of the Habsburg dynasty and other rulers of the time. Nonetheless the imperial image was deliberately different from that of Louis XIV of France. But, as in France, arts and design played a crucial role in the creation and dissemination of the image of the Emperor throughout and beyond the Holy Roman Empire. The date 1665 on the cup means that it was made comparatively early on during Leopold I’s reign.

Possibly the closest comparison in terms of form and history is a cup that was made by Viennese court goldsmith Ferdinand Kunath for Leopold’s predecessor Ferdinand III in 1655 (Esterhazy Collection, inv. no. E 65.1, see Esterhazy-Schatzkammer, exh. cat. 2006-2007, cat. no. 54, pp. 120-121). It also features lavish taille-basse and painted enamel while the bowl of the cup resembles a closed blossom. The Esterhazy cup is known to have been altered within thirty years of its making. Emperor Ferdinand III gave it as a token of appreciation to his privy counsellor Johann Matthias Goldegg. When Goldegg died without heirs in 1657 this comparable cup was returned to the Imperial Schatzkammer in Vienna where it remained until 1687 when Emperor Leopold I once more used the cup as Imperial gift, and had an inscription added.

The enamel elements on the different parts of the cup are slightly different in style and colour which is probably evidence of different makers contributing to this masterpiece with the respective technical expertise, such as enamel en ronde bosse or painted enamel. All elements are in line with ornaments and forms used at the time indicated by the inscription on the piece.
The pierced enamel plaques are comparable to Augsburg work, for example a table clock by Heinrich Mannlichc, ca. 1670/1675, in the Residence in Munich (ill: Helmut Seling. Die Kunst der Augsburger Goldschmiede, Munich: Verlag C. H. Beck), vol. 2, plate XX) or a reduced copy of a Marian column by Philipp Küsel, ca. 1675/1678 (ill: Paulus Rainer. Splendour & Powe. Imperial Treasures from Vienna. Exh. cat. Cambridge, The Fitzwilliam Museum), 2011, p. 58, fig. 12). The overall form is closer to somewhat earlier Augsburg work without a direct comparison.
The figural stem of three entwined dolphins is a motif that can be found in South German goldsmith designs from the late 16th century, including a design by Paulus Vlindt (Flindt) published in Nuremberg in 1594 (V&A object number E.644-1907) 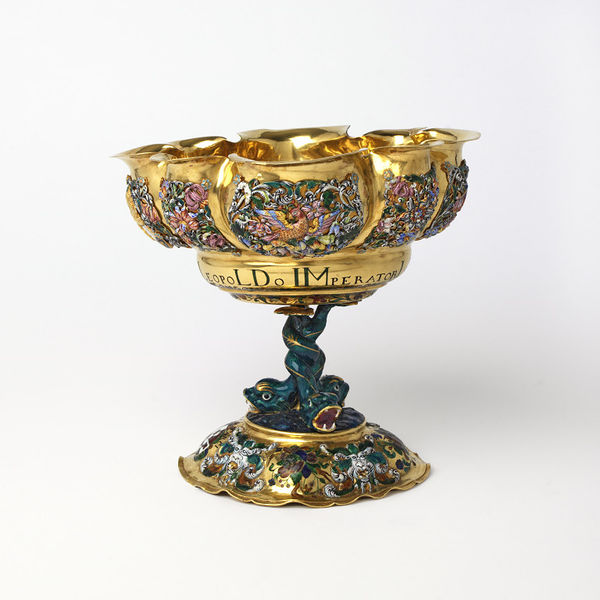