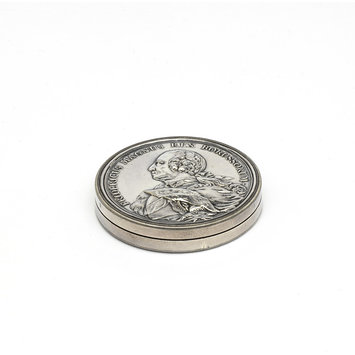 Frederick II (1712-86), more commonly known as Frederick the Great, made Prussia a major European power. A highly cultivated admirer of the arts, the king was himself a gifted musician, composer and linguist. This box is made from two separately struck sheets of silver, with applied rims. The medal on the base celebrates Frederick's victories in Silesia and is signed by Johann Melchior Morikofer. Inside are a series of paper roundels designed by G. Eichler, published in 1763, and engraved by B. Hubner with scenes from the wars for Silesia (1740-63). The rims are probably by Jakob Langenbucher II or III.

Circular silver medal, the obverse struck with a portrait of Frederick II the Great of Prussia, facing left, wearing an ermine-lined cloak embroidered with crowns over armour, the reverse with a figure of Victory writing 'SAE/ CU/ LUM/ FRI/ DE/ RICI' on a book supported on the back of Father Time.

Signed 'I.M.M.'
On the arm on the obverse

Inscribed 'VERITAS PARADOXA'
On the reverse

Signed 'I M Morikofer F' and dated 'MDCCLVIIII'
On the reverse

2. Box medal with Frederick the Great of Prussia, 1759 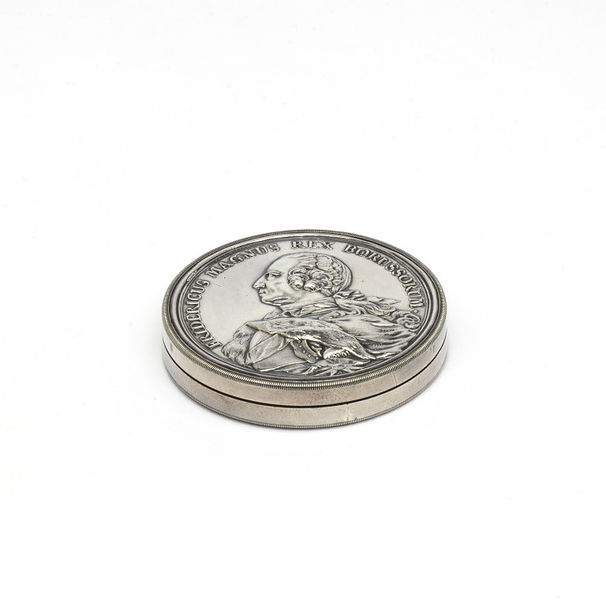