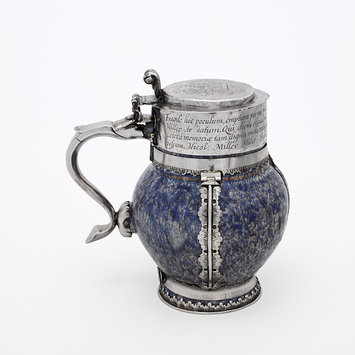 This tin-glazed earthenware pot is known as 'Malling' ware. The Latin inscription on the silver mounts records the ownership of the pot by various members of the Miller family in the 17th century. Whilst the earthenware was produced around 1600, the mounts were made half a century later, ca.1658.

Outside the wealthiest court circles, 17th-century silver was used primarily for eating and drinking. The dining table was the heart of social activity, and novelty items were made for fashionable new drinks flavoured with spices and drinking games. The range of British silver for the home from this period (the first for which a representative quantity survives) demonstrates increasing foreign influences from France, the Netherlands and Portugal. The rising demand for fashionably decorated European silver from the 1660s onwards reflects Britain's new wealth and political stability.

The earthenware jug has a bulbous body and a cylindrical neck and is covered with a mottled mauve glaze. A plain ring mount is attached to the foot by engraved foliate tongues. There are plain rings around the base of the body and neck, each with similar engraved foliate-tongue borders, joined by three vertical straps with similar borders and a narrow applied strip down the centre of each strap. The raised flat top cover is shaped to a point opposite the handle and engraved with the arms of Miller of Wrotham, Kent within a foliate mantle. The tankard has a bifurcated and reeded thumbpiece and a plain S-scroll handle.

Earthenware, with raised and engraved silver

Fragile hoc poculum, emptum per me fuit A Dnj. 1618. et mox Proavunculo meo Nicolao / Miller Ar datum. Qui diem claudens extremum A 1621 aetatis suae .85. id. inter / caetera memoriae tam digna mihi reliquit ut nisi ingratus essem, non / recordare non possum. Nicol: Miller Milit Junij 12. An. 1658 Aetatis suae. 65.
This fragile cup was bought by me in A. D. 1618 and soon after given to my maternal great-uncle Nicholas Miller Esquire, who, concluding his last day in the year 1621 at the age of 85, bequeathed it to me together with other things so worthy of note that
Latin; The broad neck mount; engraved

The arms are those of Miller of Wrotham, Kent. The younger Nicholas Miller mentioned in the inscription married Anne, daughter of William Style of Langley, Buckinghamshire. He was knighted in 1658. (Schroder, 1988, p. 98)

This type of early English tin-glazed ceramic imitating the form of imported Rhenish salt-glazed stoneware (see: cat. no. 3) is known as Malling ware. The name is taken from a silver-gilt-mounted pot of 1581 used for many years as a communion vessel. 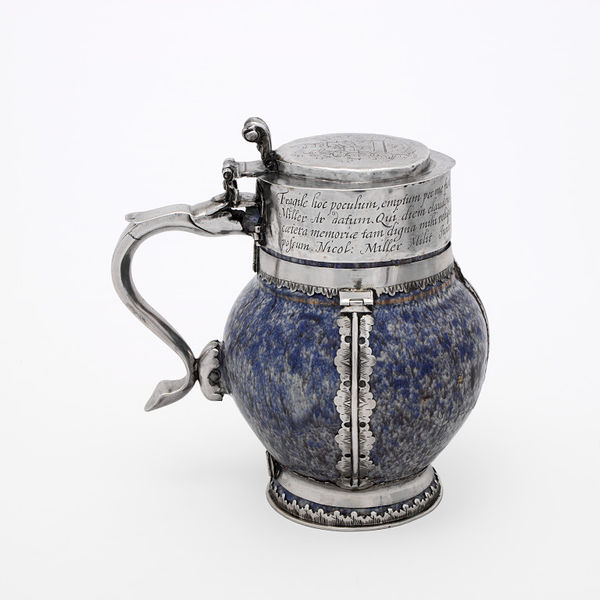