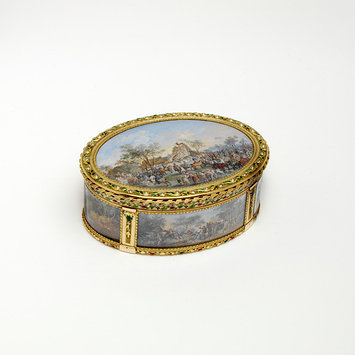 The scene painted on the top of this box took place on July 13, 1740 in the royal forest of Compiègne. During a court hunt involving Louis XV, a stag was pursued onto the roof of a thatched cottage and remained at bay until the master of the hunt cut the roof from underneath him. The box is reputed to have belonged to Louis XV and to have been subsequently presented to André Huë in 1824 by Louis XVIII. The Huë family had a long tradition of royal service, principally as greffiers de chasse, record-keepers of the royal hunt at Fontainebleau.

Engraved 'Drais Bijoutier du Roy a Paris'
On the bezel

Signed 'van Blarenberghe'
On the miniature on the base

The scene depicted on the cover took place on the
French royal estate at Compiègne on 13 July 1740. A stag
pursued by the hunt took refuge on the thatched roof
of a house. Louis XVIII later presented the snuffbox
to Baron André Hüe in 1824. The Hüe family had long
served as record-keepers for the royal hunt. According
to family tradition, the box was first owned by Louis XVI. 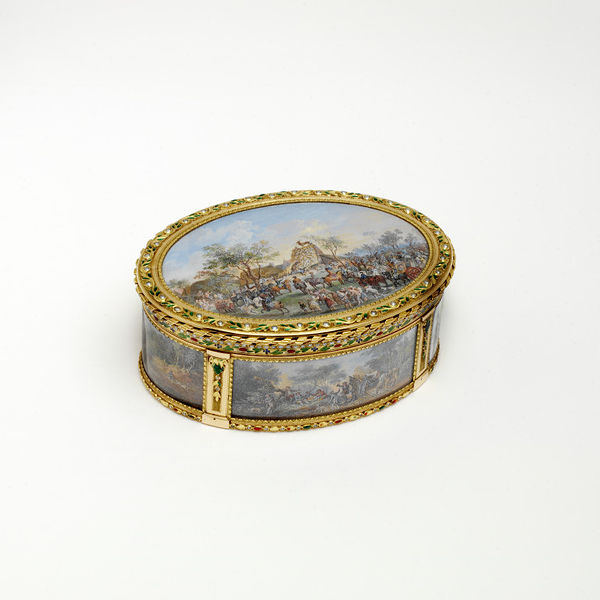