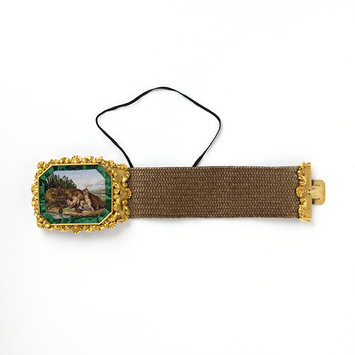 This micromosaic depicts Romulus and Remus, the legendary founders of Rome, who were rescued as infants from the River Tiber by a she-wolf. The wolf raised them until they were found by the shepherd Faustulus. It has been set into the clasp of a wide bracelet made of woven hair. Wide bracelets, often several worn together on one wrist, became fashionable in the 1820s.

The term 'micromosaic' is used to describe mosaics made of the smallest glass pieces. Some micromosaics contain more than 5000 pieces per square inch. The earliest attempts at micromosaic revealed visible joins between the pieces (known as tesserae) and a lack of perspective. Later artists such as Antonio Aguatti made huge advances in micromosaic technique, resulting in renderings that were truer to life. Glass micromosaic technique developed in the 18th century, in the Vatican Mosaic Workshop in Rome, where they still undertake restoration work today.

A chased gold clasp inset with an eight-sided mosaic depicting Romulus and Remus with the wolf in a malachite surround, affixed to a band of woven hair.

Chased gold, carved malachite and micromosaic with a band of woven hair

Historical significance: Two other Gilbert micromosaics illustrate the same subject. Loan: Gilbert.206:1-2008, a plaque, which is shown in an adjacent drawer.

Romulus and Remus were the twin sons of Mars, god of war, and a vestal virgin, who accused Mars of violating her. She was thrown into prison and her sons were ordered to be drowned in the Tiber. They survived and were reared by a she-wolf as shown in the micromosacis plaque on this bracelet. Romulus became the legendary founder of Rome.

Wide bracelets became fashionable in the 1820s. Several were often worn together on one wrist. This one depicts Romulus and Remus, the legendary founders of Rome, who were rescued as infants from the river Tiber by a female wolf. The wolf raised the twins until they were discovered by the shepherd Faustulus. 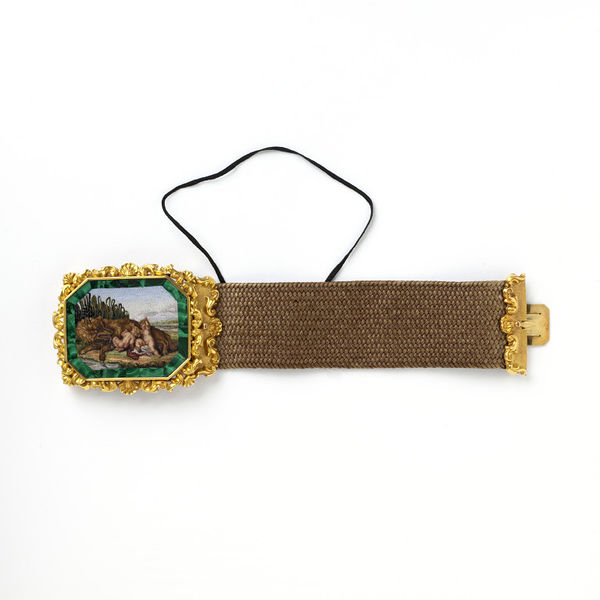